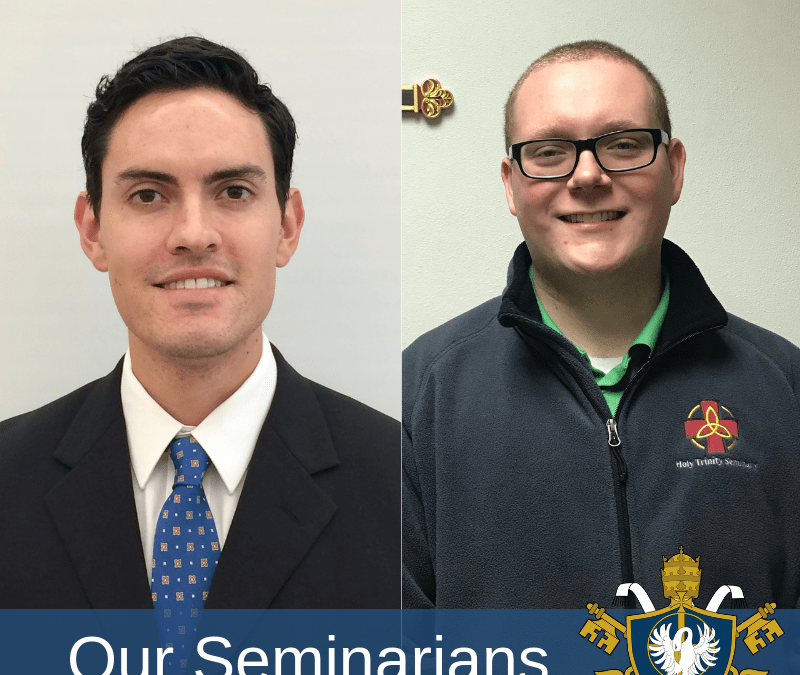 Our parish is thrilled to have two seminarians! We encourage parishioners to keep Matthew Bauer and Sebastian Barbosa-Garcia close in prayer and to send your wishes in the form of cards and other support to their addresses listed below:

Sebastian Barbosa-Garcia is originally from Bogota, Colombia, but his family relocated in South Carolina and had made Greenville home since 2004. A 2012 graduate of Furman University, Sebastian worked as project manager for Greenville Health Hospital Systems for several years. In 2017, he started his priestly formation as a seminarian for the Diocese of Charleston at St. Vincent de Paul Regional Seminary, located in Boynton Beach, Florida. He is currently in his second year of Pre-Theology.

Matthew Bauer is originally from Dayton, Ohio where he went to St. Helen’s Catholic School. Upon moving to Greenville, he entered Prince of Peace Catholic School graduating in 2011.  And, graduated from St. Joseph’s Catholic School in 2015.  According to Bauer, attending Catholic school is what ignited his love for the faith and his desire to serve the faithful.  He says, “I found good role models in my teachers and the priests that were in my life.  They nurtured and encouraged me to discern a vocation to serve the church.  My family and friends were also very supportive during this critical time of discernment, and I decided my senior year of high school that I would enter seminary formation for the Diocese of Charleston.” Matthew is in his Junior year at Holy Trinity Seminary. He feels it has been a blessed experience where he has continued to grow in desire to live a life of service to God and the people of his church through holy priesthood.