About Prince of Peace Catholic Church

The Symbolism Our Logo 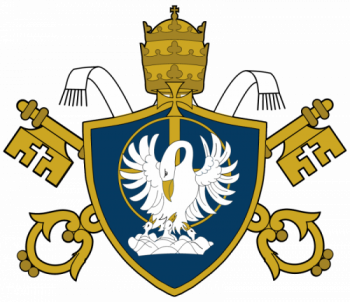 According to legend, in a time of famine a mother pelican would draw blood from her own chest and give the blood to her chicks.  Thus the pelican symbol in Christianity, also called pelican-in-her-piety, symbolized the sacrifice of Christ on the cross (because he gave his blood for others) as well as the Eucharist (because it represents Christ’s blood and provides spiritual nourishment).

The papal keys symbolize the devotion of the parish to the Successor of St Peter as the guarantor of unity in the Church.

The relics on our altars on solemn occasions and in our altar:

The History of Prince of Peace Catholic Church

In March 1974 the Parish Goals and Development Committee of St Mary’s Church in Greenville suggested a meeting to determine the feasibility of a new parish because of the large and growing population of Catholics in the Taylors and Greer areas. A general meeting was held at the Episcopal Church of the Good Shepherd in Greer and the consensus was to establish a new parish. A search was begun for a host church where Mass could be said since it was obvious that the Episcopal Church was too small. Grace Methodist Church in Greer agreed to share their facilities and Msgr. William Croghan and Father Michael O’Connor of St Mary’s alternated saying a Saturday evening Mass there.

It soon became clear that the majority of Catholics who joined in this new endeavor were from the Taylors area and Lee Road Methodist Church agreed to let us use their sanctuary for Mass on Sundays. Father Ronald Anderson, who had recently retired and moved back to Greenville in September 1974, joined the priests from St Mary’s in saying Mass in both Greer and Taylors. At both locations a social hour followed the Mass and it was from these gatherings that communications and friendships began that served as the basis for the new parish.

During this period arrangements were made to buy 14 acres of land on Brushy Creek Road in anticipation of building a church. This was considered an ideal location since the community consisted of people from Mauldin, Spartanburg, Tryon, NC and Travelers Rest, as well as from St Mary’s and Our Lady of the Rosary in Greenville.

Father Tom Bonifante was named the first Pastor and formed a building committee to begin the planning for our present structure. When the building plans were approved for construction of the first building, the present Church began. The contractor was our own parishioner, Henry Holseberg.

Father Tom Bonifante was succeeded by Msgr. Croghan who was the Pastor at the time of the dedication of the church. 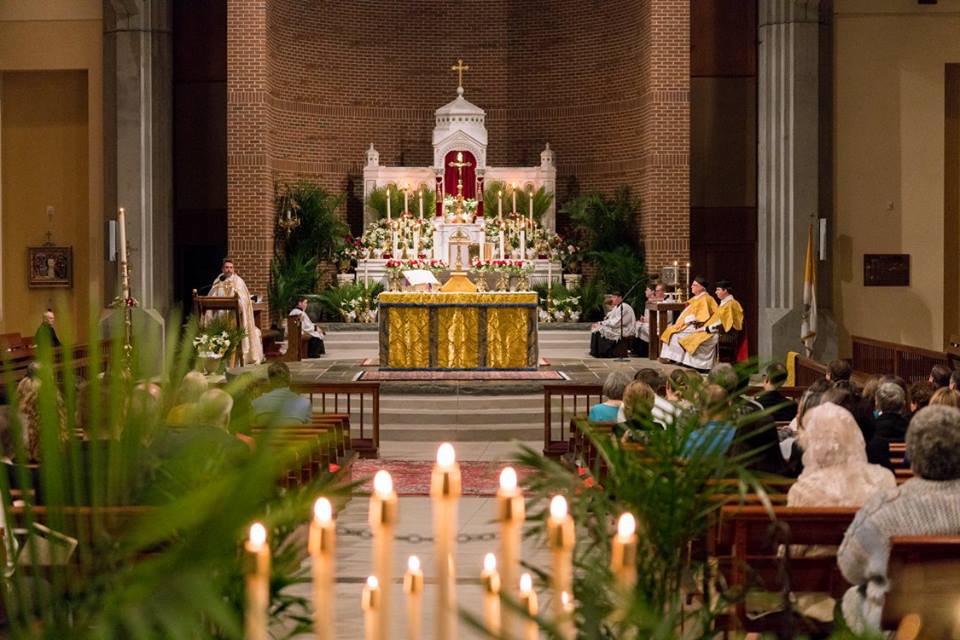 The parish did not have a real name yet, just a mission of St Mary’s. “Lee Road Methodist Church” was what one read on the sign going to Mass on Sunday in their gym. There were three or four popular suggestions. Msgr. Croghan did not like the name Prince of Peace; he thought the people would use POP or ‘Pop’ to refer to the parish. ‘Blessed Trinity’ was a name favored by some. One Sunday all the members of the parish voted at the Masses, and when the ballots were counted, “Prince of Peace” became our name.

Foundation of the Parish

In June 1975, the Greer-Taylors Endeavor came to an end and was separated from St Mary’s Parish.  By December 1975, Bishop Ernest Leo Unterkoefler established two Catholic parishes: Prince of Peace, which by June 1976 had over 240 families and Blessed Trinity in Greer.

Father Sikora fills in as Administrator until a Pastor is assigned.

On September 1, 1979 there is a welcoming party for Father Lehocky and Father Evatt.

By 1985 the Parish had grown to 900 families with estimates that by 1990 Prince of Peace would be home to approximately 1220 families.

Mass of Christian Burial for Rev.Ronald P Anderson on January 22,1994.

Father Chester Moczydlowski was assigned as Pastor in March 1995 and was here until July 1998.

Father Steven Brovey came to Prince of Peace in July 1998.The Capital Campaign fund to build a new church building was started in October 1999.

Some of the church furniture was designed and built by a parishioner, Jerry Paradis. Jerry made the Baptismal bowl base, Tabernacle stand, candle holders and gift table.

Stations of the Cross

The framed Stations of the Cross were donated by Minnie Burchfield in memory of her parents, Carlo and Vita Bucossi. Originally a tapestry, they were framed individually when Father Seitz and Minnie decided they could better serve their purpose in a new form. 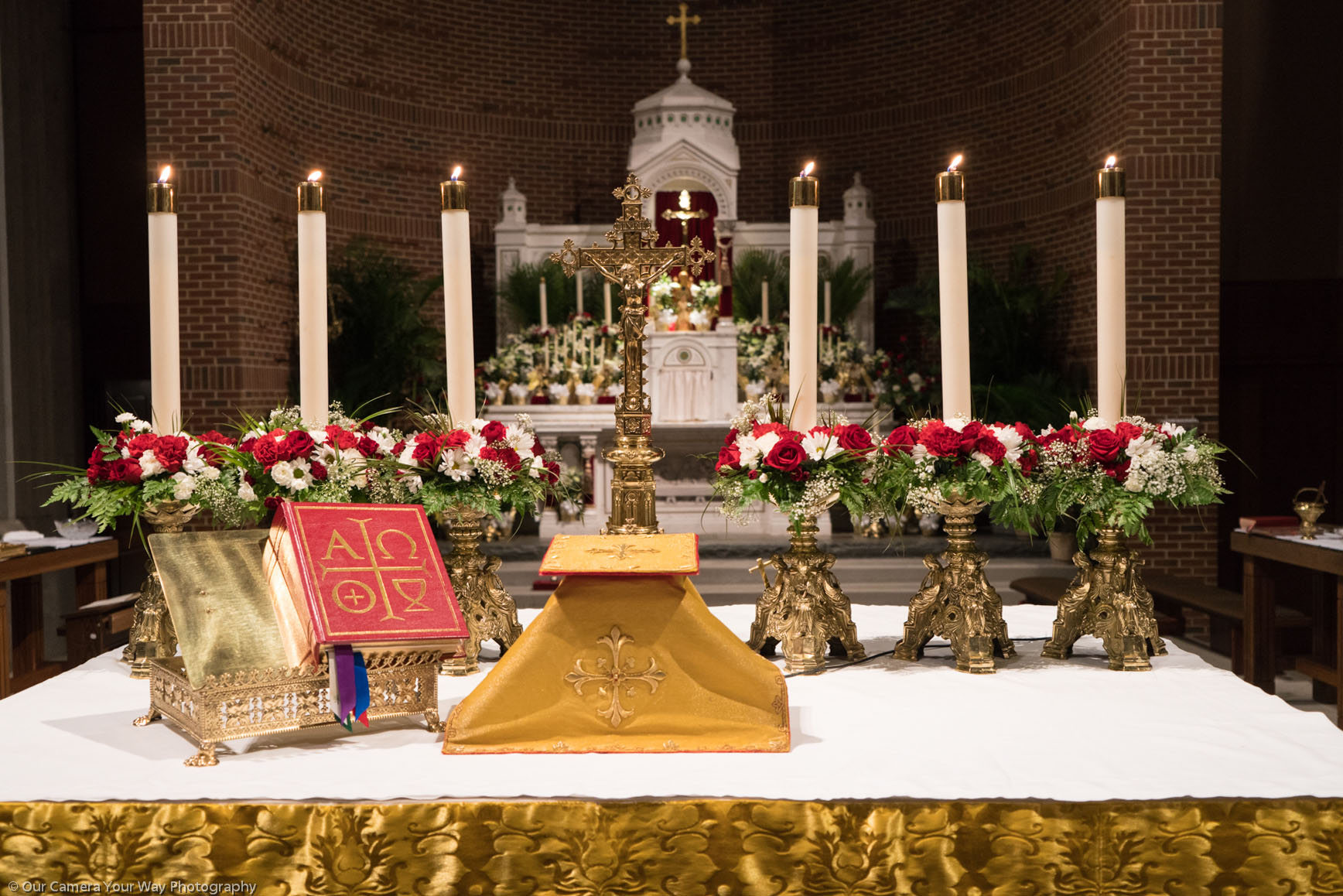 In December of 1979, motions were made to set up the purchase of a pipe organ for the church as a memorial to Father Croghan. On August 15, 1984 there was a dedication recital on the occasion of the blessing of the re-built Church organ-a pipe organ built and given in memory of Msgr. Croghan. The organ at Prince of Peace was originally built in New York City in 1865. Levi U Stewart built this organ for St James Episcopal Church in Titusville, Pennsylvania.

In 1896 the organ was enlarged to 15 sets of pipes, and in 1909 it was moved to Trinity Church. The organ was dismantled in 1980 when Trinity Church closed. It was then rebuilt as a new organ incorporating the original pipes with a new mechanical key action.

This rebuilt organ was installed in Prince of Peace and dedicated on August 15, 1984. It was given in memory of Monsignor William Croghan by the people of the parish. 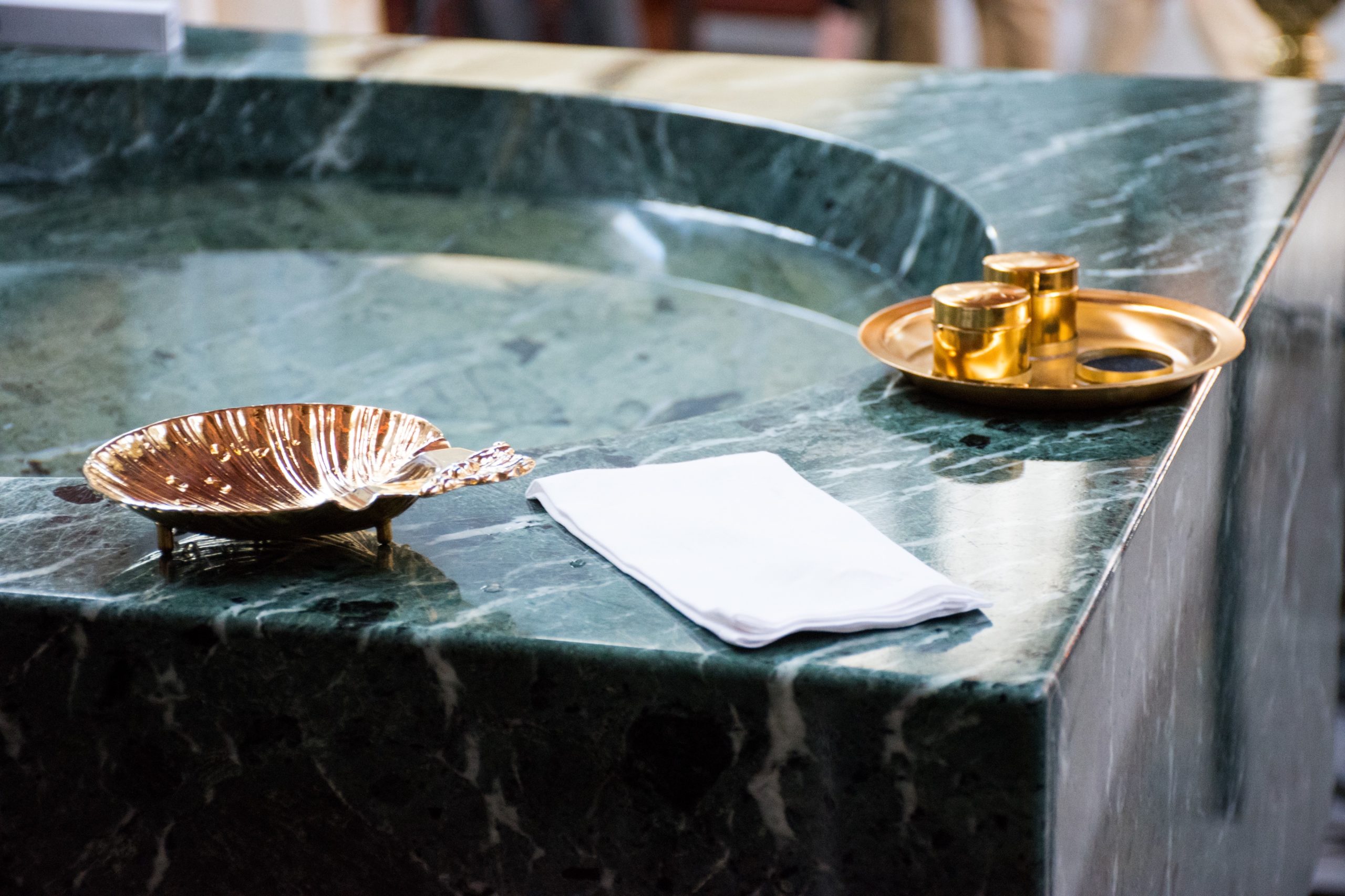 During Lent, 1981, Fr Lehocky and the parish staff decided to add something special to a Lenten liturgy. The whole parish was asked to transfer a bit of clay from one mound to another. Afterward, all the clay that had been handled was used by a potter to form the Baptismal Bowl and a number of clay patens and chalices. Many ‘hands’ went into the creation of those objects. In 2012, it was donated to St Rafka Maronite Catholic Church in Greer.

Throughout the rooms in the parish buildings you will see a variety of crosses. Each was donated by a parishioner who had traveled to another country and brought back a cross. These are indicative of Prince of Peace- the crosses are as varied as the parishioners who have blended to form this parish.

In April of 1985 a comprehensive plan of Building Expansion was recommended which included a proposal for 14 classrooms and a Parish Center. The Education Building site was blessed in April 1991 by  Father Seitz, our Pastor and we opened in November 1991. It was designed by Bradley Van Name, a parishioner, in conjunction with the Parish Building Committee. The pastor at the time was Rev Paul Seitz.

The Parish Activity Center (PAC) opened in August 1995 with a gala to celebrate the grand opening. It accommodates athletic, social and spiritual needs due to versatility in design and mood. As one student proudly professed, “After nothing, we now have the best place in town!” The earliest community at Prince of Peace celebrated liturgy in a gym at Lee Road. In August, 1995 Prince of Peace once again celebrated in a gym, but this time in our own facility!

Howard Stevermer beautifully hand-crafted the cross in our church sanctuary. Howard offers the following explanation about his labor of love. “The boards that I had were not long enough to make a cross that big, so I cut the wood into narrow strips and was able to piece them together to create boards of the size that were needed. When I glued the pieces back together as an integrated, mixed or laminated board, it reminded me of how a parish such as Prince of Peace fits together so beautifully. The various people from diverse backgrounds help to make the community strong and viable. The young ‘growth’ wood of the tree is the light colored wood in the cross. These lighter portions of wood remind us that our young people are an important part of the whole. They bring us light and joy, and hope for the future. The wood in this cross is black walnut. It comes from one of the Stevermer farms in southern Minnesota.”

Our church building has seven roofs supports. These seven supports represent the seven Sacraments. God’s grace flows down through the sacraments, gathers us together to send prayers, praise and petitions back up to God.

At first some said that our church building looked like a ‘hovering space ship”. Others said there seems to be “no rhyme or reason” for this design. We hope this short explanation has given some rhyme and reason.

For more than three years Lee Road Methodist Church was the home of the Prince of Peace Catholic community. In 1978 we found a way to thank Lee Road and their minister, Rev. Mickey Fisher, for their help and to celebrate the relationship of the two Christian communities. A stained glass artist, who was a member of Lee Road Methodist Church, created two identical windows. We presented one to Lee Road Methodist and installed the other at Prince of Peace. This serves as a permanent reminder of the caring attitude of one Christian community to another. The window has a white dove symbolizing the Prince of Peace. The boat and cross represent the Christian journey through life. The basin with flowing water signifies the washing away of sin by Christ, a symbol chosen by the Methodists. A plaque reads “Love is Sharing.” Our window is located just behind the baptismal font, to the right of the altar. The frame was constructed and installed by young Gene Fitzgerald.

In the back of the church you notice the blue stained glass window. Mr and Mrs Edwin L Reynolds, friends of Father Croghan, were the parents of Sister Lucy Reynolds at the Poor Clare Monastery here in Greenville. Her superior, Mother Silas, was the founder and first abbess at the Monastery. When she died, the Reynolds’ commissioned a stained glass window to be made in her honor at the Trappist Monastery in Conyers, Georgia. That window is the blue window in Prince of Peace; the name of Mother Silas, OSC, is etched in the corner. 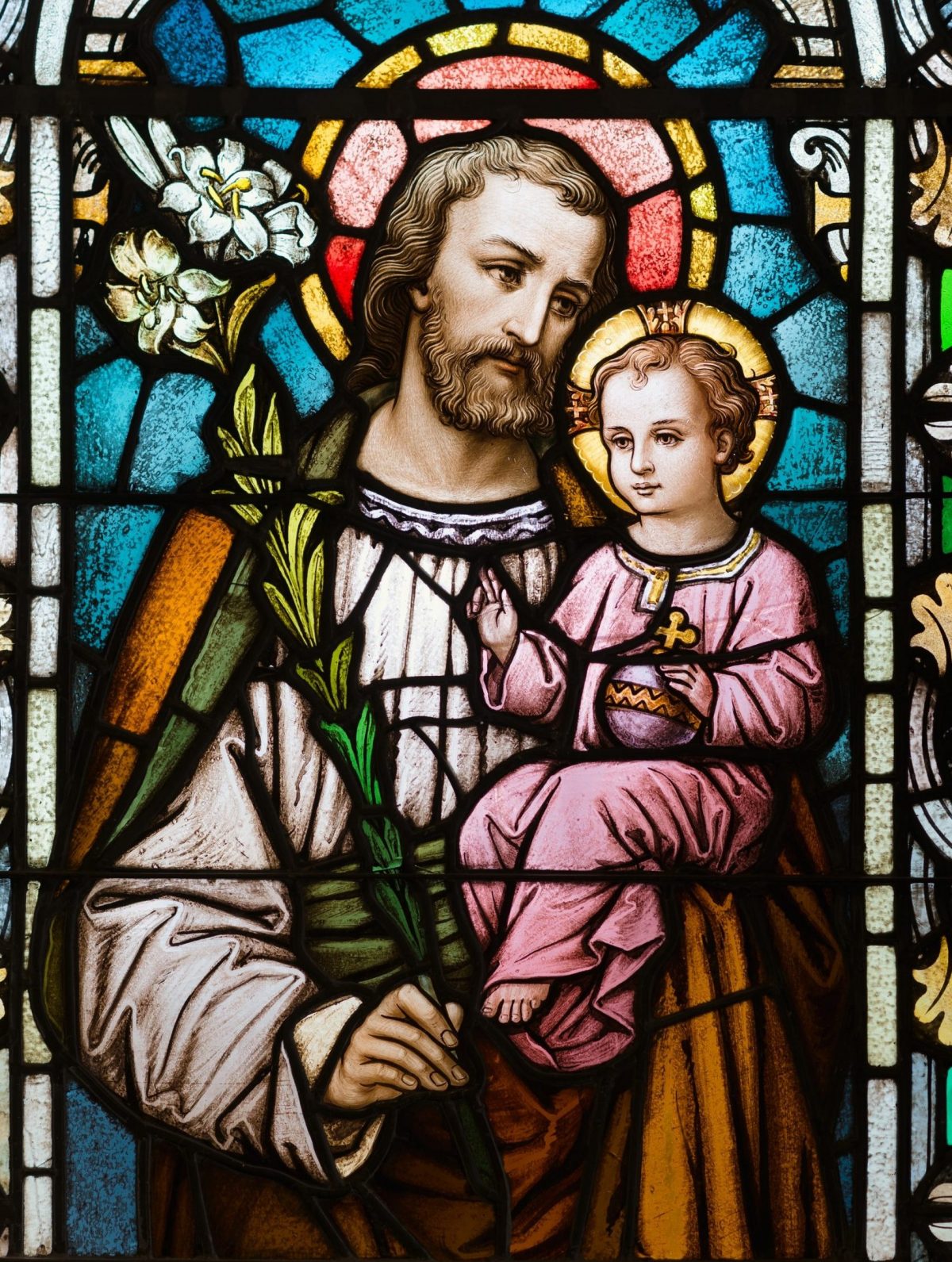