Great Pharos of Prince of Peace 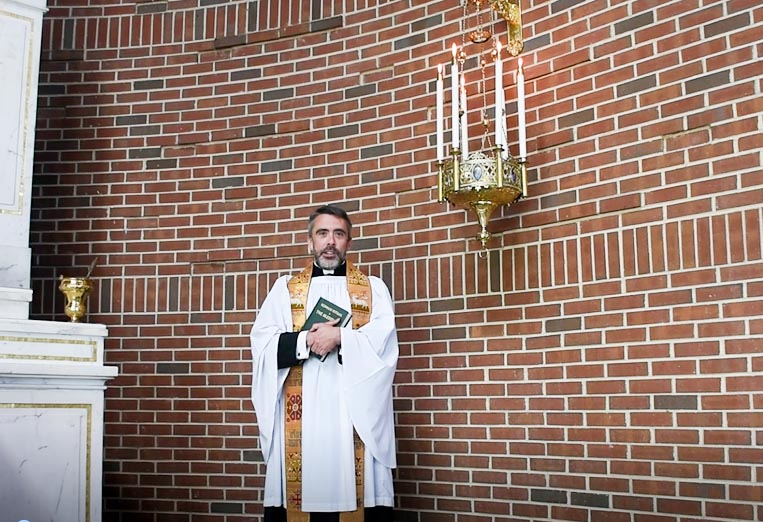 On 26 April 2020, Fr Christopher Smith blessed the installation of the new Great Pharos of Prince of Peace, a personal gift of Fr Smith to the parish in memory of his parents (Mr and Mrs Larry & Nancy Smith). A video of his blessing may be watched HERE.

The earliest Roman basilicas were often dark places lit by hanging oil lamps.  An hour before sunset, preceding Vespers on Sundays, the lamps were refilled with oil and lit while the clergy sang psalms and hymns in a pre-Evening Prayer service called the Lucernarium, or lamp-lighting hymn.  The Lucernarium disappeared from the Roman liturgy early on, but is still part of the Ambrosian Rite of Milan.  Many churches had a particularly large and beautiful chandelier of lamps in a circle called the corona lucis (crown of light) in Latin or pharos (lighthouse) in Greek.  The impressive ceremonies of the blessing of the new fire on Holy Saturday at the Great Paschal Vigil are all that is left of a rite that was done in simpler form to usher in every Dies Dominica (Lord’s Day).

Byzantine churches are still often with built with these large circular chandeliers with numerous candles.  In the West, the best surviving ancient one was donated by the Emperor Frederick to the Cathedral in Aachen in honor of the Blessed Virgin.  Often these chandeliers had three crowns, with 3, 7 and 12 candles each, for the three persons of the Trinity, the seven gifts of the Holy Ghost and the twelve apostles. They frequently hung beneath the Great Rood, the beam with the large crucifix on top of it that screened off the High Altar and the apse from the chancel crossing.  When they were all lit, they produced a pyramidal effect of light illuminating the Great Rood.  Wealthy patrons of the ecclesiastical arts donated these impressive hanging pieces of furniture as votive offerings.  The Liber pontificalis, which described the liturgy of Rome, details the intricate ornamentation and elaborate symbolism of these lanterns in the Eternal City.

In the West, the Reformation saw many of these coronae lucis destroyed.  Even in Catholic countries, as rood screens were removed for greater visibility of the rites, and churches were built with more natural light and stained glass, many exemplars of this particular type of furniture were removed.  As the XIX century saw the neo-Gothic renaissance, Augustus Pugin argued for a return to rood screens and the pharos. Some of the most beautiful ones exist in the churches he designed in England, such as Saint Giles, Cheadle.  The restored corona lucis of the XIX century is often smaller than its medieval counterpart, and it began once again to be lit for Vespers and on feasts of great solemnity, as a testament to the light of Christ shining through the darkness.

Father Christopher Smith has procured a very fine gold pharos from an antiquities trader in New York.  This fine specimen is of unknown origin, but is in the style of XIX century French neo-Romanesque.  On it are almond-shaped enamel paintings of the Ecce Homo (Christ crowned with thorns), Our Lady of Sorrows and St Joseph.  It is topped with space for six candles.  Father Smith has donated this precious piece of art and worthy addition to the patrimony and fabric of the church in honor of his parents, Mr and Mrs Larry and Nancy Smith, in thanksgiving to Our Lady for the conversion of his parents to the Roman Catholic faith.  The corona lucis will be set opposite the sanctuary lamp in the apse of the church.  He has also provided for two small modern Byzantine oil lamps with blue glass globes to adorn the Shrine of the Queen of Peace as votive offerings to Mary for her intercession.

A plaque reads, To the glory of God, in the year of Our Lord 2019, Father Christopher Smith donated the corona lucis, or pharos of this church, and the votive lamps at the Lady Altar, in thansksgiving for the conversion of his parents, Mr and Mrs Larry and Nancy Smith, to the Roman Catholic faith, through the intercession of the Blessed Virgin Mary.