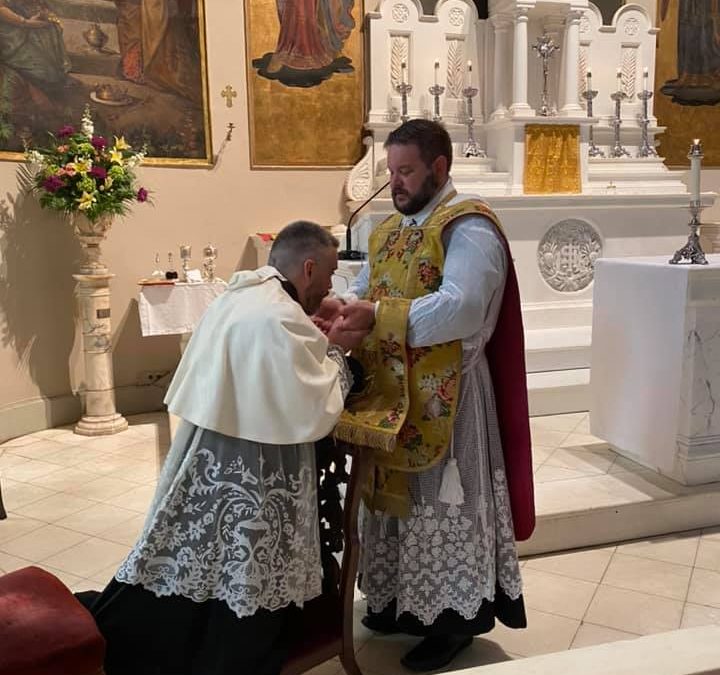 Last night, we all watched as two young men threw themselves the ground and stretched out their arms in a ritual whose origin and meaning we will only ever truly know when we have glimpsed beyond the veil that separates this world from eternity.  What were they doing, and why?  At the name of Jesus, every knee shall bow, in heaven and on earth and under the earth, and every tongue confess that Jesus Christ is Lord, to the glory of the Father.  The cantors called out, Christ, have mercy.  Christ: the Messiah, the Anointed One: His Holy Name resounded as we all responded with one voice, have mercy on us, miserere nobis.  And who responded exactly?  Not just those who were gathered to see the ordination of a son, a brother, a friend, a colleague.  One by one, names were called out, as the heroes of our faith were called upon by name: apostles and martyrs, virgins and confessors; all the saints and angels in heaven, those named and those not, thundered forth a litany of supplication and praise, and even the Church Suffering in purgatory, from under the earth, joined in that endless pattern of happy voices calling on the name above every other name.  And at that sound, my brother Michael, after your name had been called, and you stood up, stood out and stood apart from the assembly of the faithful to a divine vocation, you fell flat on your face.

My dear friend, the best place you will ever and can ever be as a priest of Jesus Christ, is flat on your face in adoration of the Majesty of God.  Oh come let us worship and bow down and let us kneel before the Lord our Maker.  You bowed down, and knelt and worshipped.  And in that instant you stretched your arms and your hands forth, and out.  I was ready to be sought by those who did not ask for Me, I was ready to be found by those who did not seek Me.  I said, here I am, here I am.  I spread out my hands all the day to a rebellious people.  Jesus was sent by His Father to a rebellious people, a people made in His image and likeness who had wandered.  And moments after He commissioned His closest friends to share in that ministry to seek out the lost and reconcile them to God, Jesus found Himself surrounded by sleeping apostles in the Garden of Gethsemane, but still alone with his Father: bowed down, kneeling and worshipping the Father who was offering Him a chalice to drink to the dregs of sacrifice.  And that same Jesus spread His arms wide on the Cross hours later as a Lamb led to slaughter so that the Father’s rebellious children could be brought by the obedience of faith to a place where death would have no more sting.

Michael, yesterday you stretched forth your arms, your hands, and the Bishop slathered them up with oil.  Christ, who was the anointed one of the Father, chose to anoint you in return.  What a tremendous thing to think that as Our Lord sweat blood and tears in Gethsemane, the olives hanging from the trees would be crushed and pressed; the wood of those trees would be fashioned into an instrument to crush and press the body of the Anointed One Himself.  That oil from those olives, the wood of that Cross, it all points to the obedient sacrifice of love that would be the instrument by which man would be reconciled to God.  What was crushed and pressed would be raised and exalted.

That first Maundy Thursday of Eucharist and Priesthood; that first Good Friday of Cross and Death; that first Easter Morn of Resurrection and Gladness; they all form one Paschal Mystery, and you were conformed to be the living image of Christ, who was both Priest and Victim.  That passing over from death to life that Christ won for us by that crushing and pressing of his Body, the power of that passing over has been handed over to you.  Michael, everyone watched with great joy as someone they love so much stood up from that litany flat on the floor to a day of triumph: you have waited so long for this moment, who couldn’t share in that happiness of finally becoming a Priest.  But you also became Victim.  It is the one task of a Priest to offer up sacrifice for the living and the dead.  Every day of your life you will have the opportunity to stand before an altar made of stone, while the endless paschal sacrifice that happened once on Golgotha and is praised eternally in heaven at an altar made without human hands, is renewed and re-presented at your hands.  There will be days when you stand at that place when you will feel like it’s Palm Sunday.  People waving branches and singing Hosannas, because everbody loves a new priest.  A new priest is a sign of hope that God has not abandoned his people, that their rebellion can be cast aside by the oblation of peace, the offering of forgiveness.  But there will also be days in which you will, like Jesus in the garden, feel terribly alone, surrounded by people who are asleep, by friends who will betray you  and your God and despair, by the masses of the indifferent for whom who you are makes no difference.  There will be days in which Victim is all you know: empty, lifeless, nailed to the Cross by the injustice of the ungrateful.

And my friend, that is when you know that what happened to you yesterday amidst shouts of joy “took.”  Our Lord’s most powerful moment was when all seemed lost and he was at his weakest: naked abandonment to the will of the Father, manifest in total self-gift.  It was there that love woke the world from its slumber, and set on fire those who say yes to faith to restore, renew and reform the rebellious into a company of saints.  And so, you will find yourself flat on your face, arms and hands outstretched, pressed and crushed, offering everything you and everything you have, but so much more, because your inheritance is the Lord’s.

In a few moments, my dear brother, the deacon at your right is going to present to you a paten with a little piece of bread on it called a host.  Host, from Latin, hostia, victim.  And because this is such an important day, I’m sure you’ve made sure that paten is polished and ready to go.  You’re going to take that paten with that host on it, like you’ve practiced a million times, and there’s going to be a split second when you’re going to see your own face, your very eyes in the reflection above that holy and unblemished sacrifice.  Jesus wants you to see that: to remind you that you were called by name, chosen by grace, to be one with that victim, one with that High Priest, one with that sacrifice.  You’re not going to be any less you: but you are going to become the love that you receive.  When Jesus was in that enchanted floral paradise right outside the Upper Room, he prayed: that they may all be one, just as you, Father, are in me and I in you, the glory that you have given me I have given to them, that they may be one even as we are one.

When the chalice is offered to you, that little droplet of water will have disappeared into the abyss of wine: by the mystery of this water and wine may we come to share in the divinity of Christ, who humbled himself to share in our humanity.  That wine to gladden the hearts of men will be transformed by the power of the Holy Ghost into the Precious Blood that ransomed us from the jaws of death and nourished us with the food of immortality.  And, just as Jesus did not hold back one drop of that blood of the Cross, you too will drink the entirety of the contents of that golden chalice, just as you will fulfill all of the sacrifices obedience to this calling offers you.  And when you purify that chalice with a little droplet of wine and an abyss water and dry out that vessel, you will catch again a glimpse of the man you have become because of the gift that you have received.

Reverend and Dear Father, this is truly a day the Lord has made, which is why we rejoice and are glad in it.  It’s a beautiful life to be a priest, because it is the Lord’s own life that you have chosen to live.  There will be a day, and I hope it’s many days from now, when will you turn from the altar and sing, ite missa est, go forth the Mass is ended – and kiss the stone of sacrifice one last time.  But that will be the prelude to the day without end when what you have worshipped under sign and symbol in this valley of tears will be revealed in so much glory you will die so you can live forever in happiness.