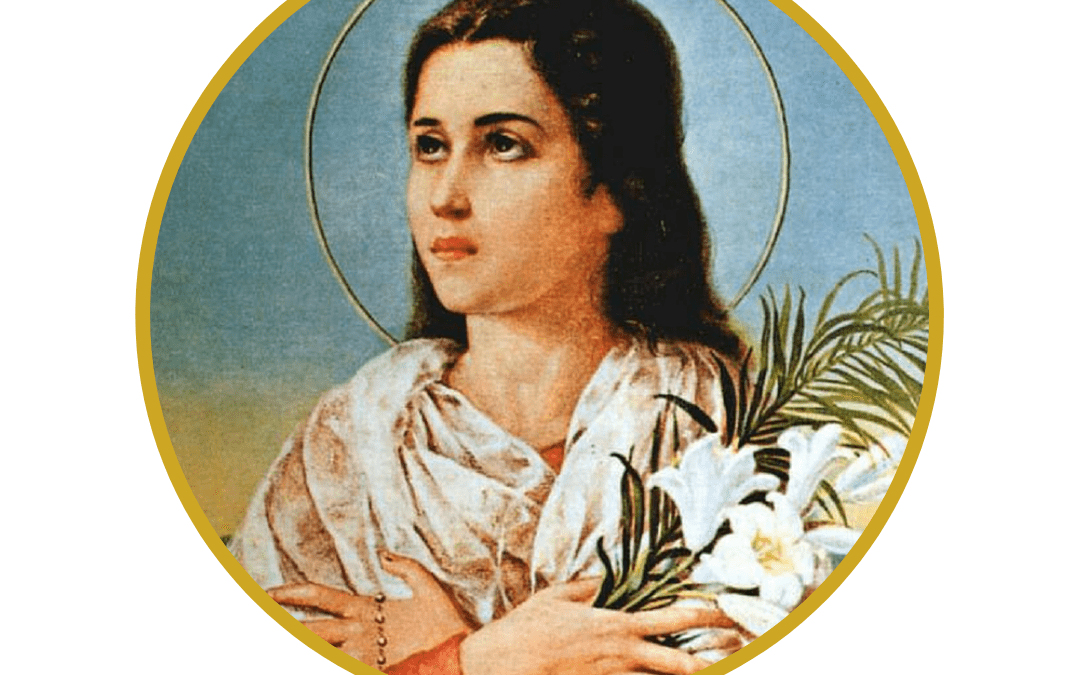 6 July: Feast of Saint Maria Goretti, virgin and martyr. Maria was born in 1890, one of six children from an impoverished farming family in Italy. In exchange for farm work, the Goretti’s lived in the owner’s abandoned factory. They shared it with another poor family, the Serenelli’s (Giovanni and his son, Alessandro). The farmland they worked was swampy, mosquito infested, and difficult to work. Maria’s father contracted malaria and died when she was nine. Maria’s mother, Assunta, had to take her husband’s place in the fields. This left Maria to take her mother’s place. Maria cooked, cleaned, did laundry, and cared for younger siblings. Maria never complained, she was an extremely pious child. In contrast, Alessandro was a rough youth, given to drinking, swearing, and callous behavior. He had impure thoughts toward Maria and would speak to her crudely.  Maria, in her great love for God, abhorred his behavior. One day, Alessandro attacked Maria. She resisted his sinful behavior saying, “No! It is a sin! God does not want it!” Alexander stabbed her fourteen times. At the hospital, doctors tried to save Maria’s life. She experienced horrific suffering, undergoing surgery without anesthesia. Halfway through the surgery, the doctor said, “Maria, think of me in Paradise.” Maria looked up and said, “Well, who knows which of us is going to be there first?” She did not realize how terrible her situation was, and the surgeon replied, “You, Maria.” She said, “Then I will think gladly of you.” Despite valiant effort, doctors couldn’t control Maria’s bleeding or infection. After twenty excruciating hours of suffering, Maria died at the age of 11. In her last moments the priest asked Maria to forgive her attacker. Her last words were “I forgive Alessandro Serenelli …and I want him with me in heaven forever.” Alessandro was arrested and sentenced to 30 years in prison. While in prison, Maria appeared to Alessandro and forgave him. That act of mercy filled Alessandro with utter contrition for his crime. From that point on, he lived a life of holiness. After his release, he sought out the forgiveness of Maria’s mother. Assunta told him, “If Maria forgives you, and God forgives you, how can I not also forgive you?” The two went together to Mass and received Holy Communion side by side. Assunta then adopted Alessandro as her own son. ­­­­He eventually joined the Capuchin Franciscans as a lay brother. On April 27, 1947, Maria was beatified; she was canonized on June 24, 1950 by Pope Pius XII. Alessandro Serenelli was in attendance at that historic ceremony, where the young girl he murdered was declared a saint. Maria’s canonization was also attended by Assunta, the first time in history that a mother was present to witness the canonization of her own child. Also present were Assunta’s four remaining children. The crowd that attended Maria’s canonization, estimated at 500,000, was the largest ever up to that point in the Church’s history. There were so many people that it was held outdoors in St. Peter’s Square, because the massive basilica was too small to hold all the faithful in attendance. St. Maria Goretti is known as the Little Saint of Great Mercy.

“The life of this simple girl—we can see as worthy of heaven…Parents can learn from her story how to raise their God-given children in virtue, courage and holiness; they can learn to train them in the Catholic faith so that, when put to the test, God’s grace will support them and they will come through undefeated, unscathed and untarnished.” – Pope Pius XII at the canonization of St. Maria Goretti