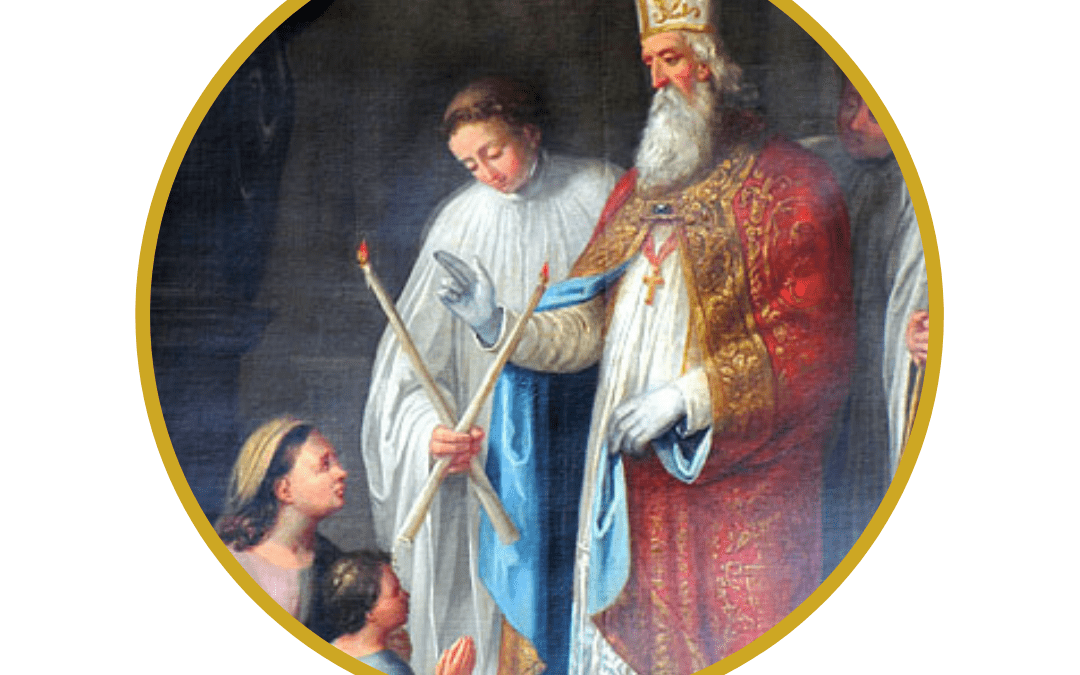 3 February: Feast of Saint Blaise. Saint Blaise was an early-fourth-century physician from Armenia. He was also the bishop of Sebastea. Most stories of his life were written 400 years after his martyrdom in the Acts of St. Blaise. Blaise was known to be a good bishop, working hard to encourage the spiritual and physical health of his people. He fulfilled his duties from a humble hermitage in a cave. He was known for many miraculous cures. Stories say that Blaise even healed injured wild animals who would show up at his cave seeking help. In the year 316, the governor arrested Blaise for being a Christian. While being escorted to prison, a distraught woman ran up to Blaise. She was carrying her young son who was choking on a fishbone. She laid the boy at the bishop’s feet. The boy was immediately healed. Another tale tells of a woman whose pig had been carried off by a wolf. The woman begged Blaise to help her. He promised that her request would be granted. Shortly afterwards, the wolf appeared at the woman’s door depositing the uninjured pig at her feet. Despite the miracles, the governor insisted that Blaise renounce his faith and sacrifice to pagan idols. The first time Blaise refused, he was beaten. The next time he was put on a stone table used for combing out wool and his flesh was flayed with the prickly metal combs that are used to remove tiny stones from wool. Finally, Blaise was beheaded. Saint Blaise is one of the Fourteen Holy Helpers (popular saints of the Middle Ages). Saint Blaise’s intercession is now invoked against choking and other ailments of the throat. He is the patron saint of throat illnesses, animals, wool combers, and wool trading.

The traditional Catholic practice for this feast day is the blessing of throats. The priest uses two of the newly blessed candles from the Feast of Candlemas (Candlemas, which occurs 40 days after Christmas on February 2nd, celebrates the Presentation of the Lord in the Temple. When holy Simeon saw the baby, he said: “For my eyes have seen your salvation which you prepared in sight of all the peoples, a LIGHT for revelation to the Gentiles, and glory for your people Israel.” From these words comes the traditional Catholic practice of the blessing of candles.). The two candles are tied together in the middle to form a cross. The priest holds the candles over the throat of each person and prays the blessing: Through the intercession of Saint Blaise, bishop and martyr, may God deliver you from all ailments of the throat and from every other illness: in the name of the Father, and of the Son, and of the Holy Spirit. Amen. If you are not able to attend Mass and receive this blessing, it may be done at home by the head of the household.