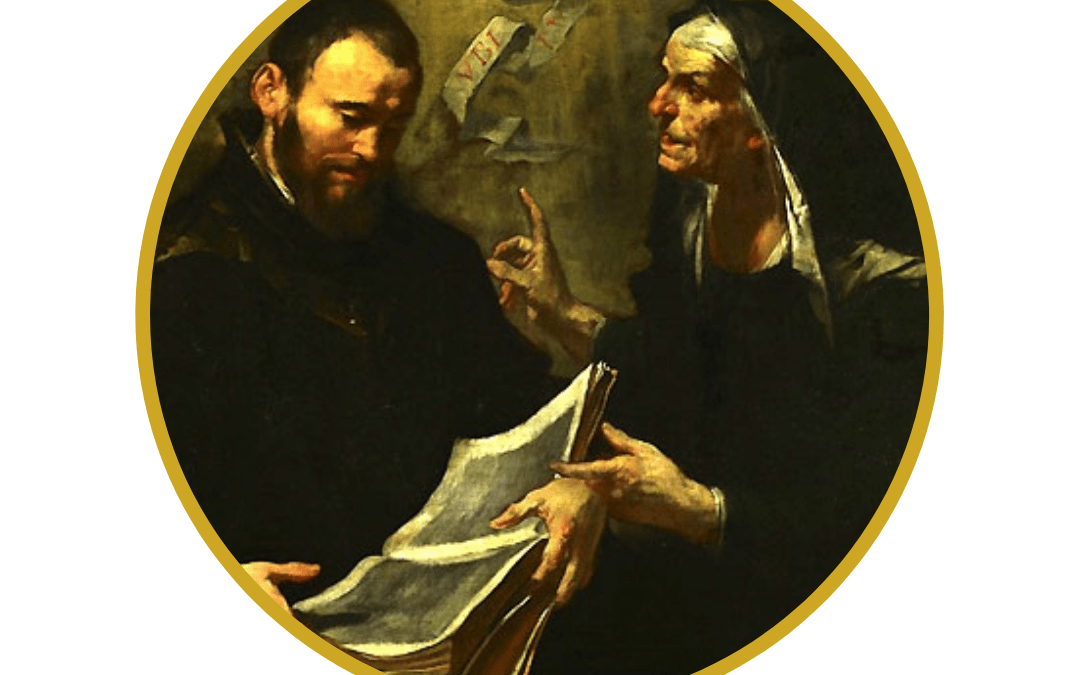 27 & 28 August: Feasts of Saint Monica and Saint Augustine. The feast of Saint Monica is celebrated the day before that of her son, Saint Augustine; a fitting combination. Born of Christian parents in Tagaste, North Africa in 333, Monica was married early in life to a man named Patritius. He was a pagan, known for a violent temper and immoral habits. Monica’s almsgiving and constant prayer annoyed him. They had three children, Augustine, Navigius, and a daughter, Perpetua (who later became a nun). As a mother, Monica’s anxiety centered on Augustine: he was wayward and, as he himself tells us, lazy. He was sent to Madaura to school and Monica seems to have literally wrestled with God for the soul of her son. During this time, Monica received a great consolation when Patritius converted to Christianity before his death. Augustine then became a Manichean, which caused Monica to kick him out of her house. She went tearfully to the bishop to ask for help and he responded famously, “Don’t worry, it is impossible that a son of so many tears should be lost.” One night, Augustine left for Rome and Monica followed him the whole way and met St. Ambrose who played a key role in Augustine’s conversion. Monica died at Ostia, near Rome in 387. On the day after St. Monica’s feast, the Church honors St. Augustine. Augustine was born on November 13, 354. The story of his life is written in the autobiographical Confessions. Augustine, though brought up early as a Christian, lived a life of revelry and sin, and drifted away from the Church. He enjoyed the pursuit of pleasure above all things. He was well-known in Carthage for his brilliant mind and rhetorical skills and sought a career as an orator or lawyer. He also fell in love with philosophy. He then went to Rome and later Milan where he met Saint Ambrose, the bishop and Doctor of the Church, whose sermons inspired him to look for the truth he had always sought in the faith he had rejected. He was baptized by St. Ambrose and soon after, his mother died knowing her prayers had been answered. Augustine returned to Africa, “having now cast off from himself the cares of the world, he lived for God… in fasting, prayers, and good works, meditating on the law of the Lord by day and by night.” On a visit to Hippo he was proclaimed priest and then bishop against his will. He later accepted it as the will of God and spent the rest of his life as the pastor of Hippo, from where he spent much time refuting the writings of heretics. He wrote more than one hundred works of theology, apologetics, and philosophy, including his famous The City of God. He died of illness at age seventy-five and was venerated as a saint immediately. Augustine was recognized as a Doctor of the Church in 1298. He is known as one of the most significant and influential thinkers in the history of the Catholic Church. His teachings were the foundation of Christian doctrine for a millennium.

Ideas for celebrating these feast days at home: