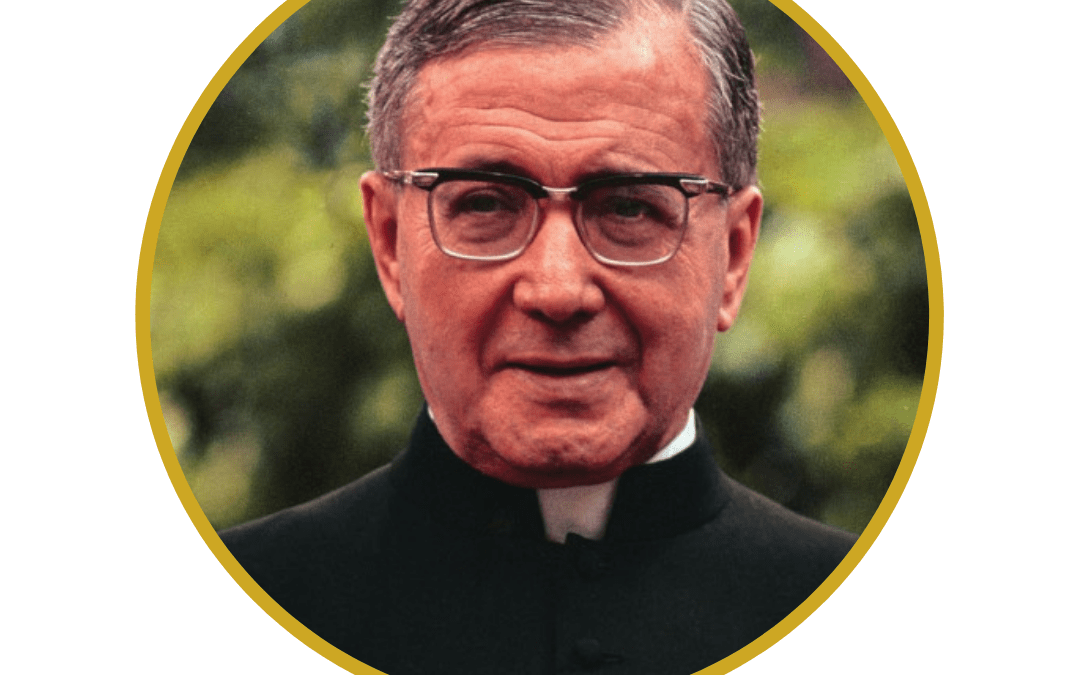 26 June: Feast of Saint Josemaria Escriva de Balaguer. St. Josemaria Escriva was born in Barbastro, Spain, in 1902. Of his five siblings, the three youngest died young. His parents, José and Dolores, raised their children to be devout Catholics. His mother taught Josemaria many prayers he would recite his entire life. In 1915, his father’s business failed and they had to move to find work. The family struggled to get by. It was as a teenager that Josemaria first sensed his vocation. Moved by the sight of footprints left in the snow by a barefoot friar, he felt God was asking something of him. He thought becoming a priest would help him discover this calling from God. He prayed fervently, “Lord, let me see what you want.” Josemaria’s father died in 1924, leaving him as head of the family. He was then ordained in 1925 and began his ministry in a rural parish. In 1927, Fr. Josemaria’s bishop gave him permission to move to Madrid to obtain his doctorate in law. In 1928, during a spiritual retreat, Fr. Josemaria saw what it was that God was asking of him: to found Opus Dei, a way of sanctification in daily work and through a Christian’s ordinary duties. The name “Opus Dei” is Latin for “Work of God”. (Opus Dei’s mission is to spread the Christian message that every person is called to holiness in ordinary life; the idea that every honest work can be sanctified.) From then on, Josemaria worked to spread the ministry of Opus Dei, while also continuing his priestly ministry. He was also studying at the University of Madrid and teaching classes in order to support his family. When war broke out in Madrid, religious persecution forced Fr. Josemaria to exercise his priestly ministry secretly. Eventually, he was able to leave via a harrowing escape across the Pyrenees, and took up residence in Burgos. In 1939, he returned to Madrid and finally obtained his doctorate in law. In the years that followed he gave retreats to laity, priests, and religious, and continued working to develop Opus Dei. In 1946 Fr. Josemaria moved to Rome and obtained a doctorate in Theology from the Lateran University. He was appointed by Pope Pius XII as a consultor to two Vatican Congregations, as an honorary member of the Pontifical Academy of Theology, and as an honorary prelate. He traveled frequently, working to grow Opus Dei. In 1974 and 1975, he traveled through Latin America, speaking to people about their Christian vocation to holiness. Msgr. Escriva died suddenly of a heart attack on June 26, 1975. By the time of his death, Opus Dei was in dozens of countries and had touched countless lives. After his death, thousands of people (including more than a third of the world’s bishops), sent letters to Rome asking the Pope to open his cause of beatification and canonization. Pope St. John Paul II beatified Msgr. Escriva on May 17, 1992, in St. Peter’s Square. The ceremony was attended by 300,000 people. “With supernatural intuition,” said the Pope in his homily, “Blessed Josemaria untiringly preached the universal call to holiness and apostolate.” Ten years later, on October 6, 2002, John Paul II canonized the founder of Opus Dei in St. Peter’s Square before a multitude of people from more than 80 countries, saying, “St. Josemaria was chosen by the Lord to proclaim the universal call to holiness and to indicate that everyday life, its customary activities, are a path towards holiness. It could be said that he was the saint of the ordinary.”