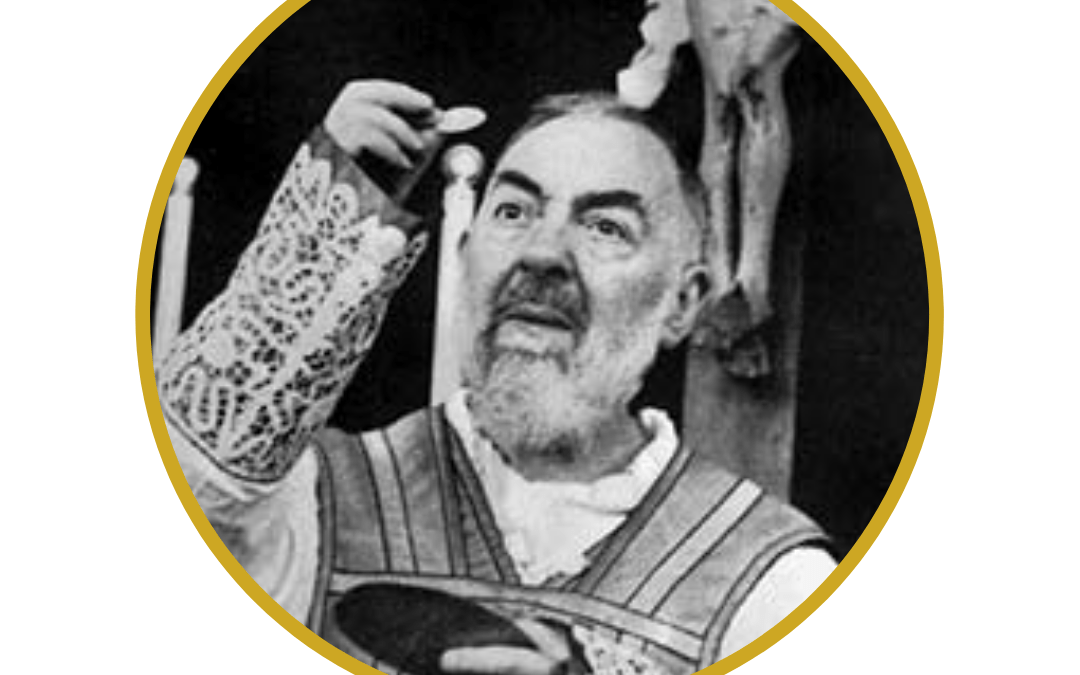 23 September: Feast of Saint Pio of Pietrelcina. Saint Pio is better known as “Padre Pio”. He was born Francesco Forgione in 1887, one of seven children in a simple peasant family. His growing up years were marked by daily Mass, family rosary, and acts of penance. He decided at a young age to dedicate his life to God. He joined the Capuchin Franciscan Friars at 15 years old. He was ordained a priest in 1910 and took the name Pio, a modern Italian form of “Pius,” in honor of Pope St. Pius V. He was assigned to the Friary in San Giovanni Rotondo in central Italy, where he lived the rest of his life. Padre Pio suffered from illnesses and health problems. He also experienced religious ecstasy and attacks from the devil (friars would report strange noises coming from his cell). He was reportedly able to bi-locate, levitate, and heal by touch. In 1918, while praying before a cross, Padre Pio received the painful Stigmata – the five wounds of Christ’s passion. He was the first stigmatized priest in Church history. The Stigmata would remain with him for 50 years. Many doctors looked at his wounds with no explanation. They openly bled with no drop in blood pressure. Doctors estimated that he lost a cup of blood every day. The wounds were deep, but free of inflammation and swelling. During World War I, Padre Pio served in the military and offered his own personal suffering for an end to war. In 1956 he founded the House for the Relief of Suffering, a hospital that serves 60,000 a year. Against his wishes, Padre Pio’s reputation for holiness and miracles began to attract crowds. Millions of people attended his Masses. He received letters from believers all over the world who asked for his saintly counsel and spiritual guidance. Countless were attracted to his confessional, where he would hear confessions for up to 16 hours a day. People waited as much as two weeks to have him hear their confession. Yet despite such notoriety, he would often say, “I only want to be a poor friar who prays.” His life was marked by long hours of prayer and sacrifice. He had a deep union with God, a burning love for the Holy Eucharist, and a fervent devotion to Our Blessed Mother. Worn out by years of intense suffering and constant apostolic activity, Padre Pio was called to his heavenly reward on September 23, 1968. He was canonized by Pope St. John Paul II in 2002. Today, his tomb is the most visited shrine in Europe, surpassing even Fatima and Lourdes.

Famous quotes from Padre Pio: “Today’s society does not pray. That is why it is falling apart.” – “Prayer is the best weapon we possess, the key that opens the heart of God.” – “Pray, hope and don’t worry. Worry is useless. Our Merciful Lord will listen to your prayer.”