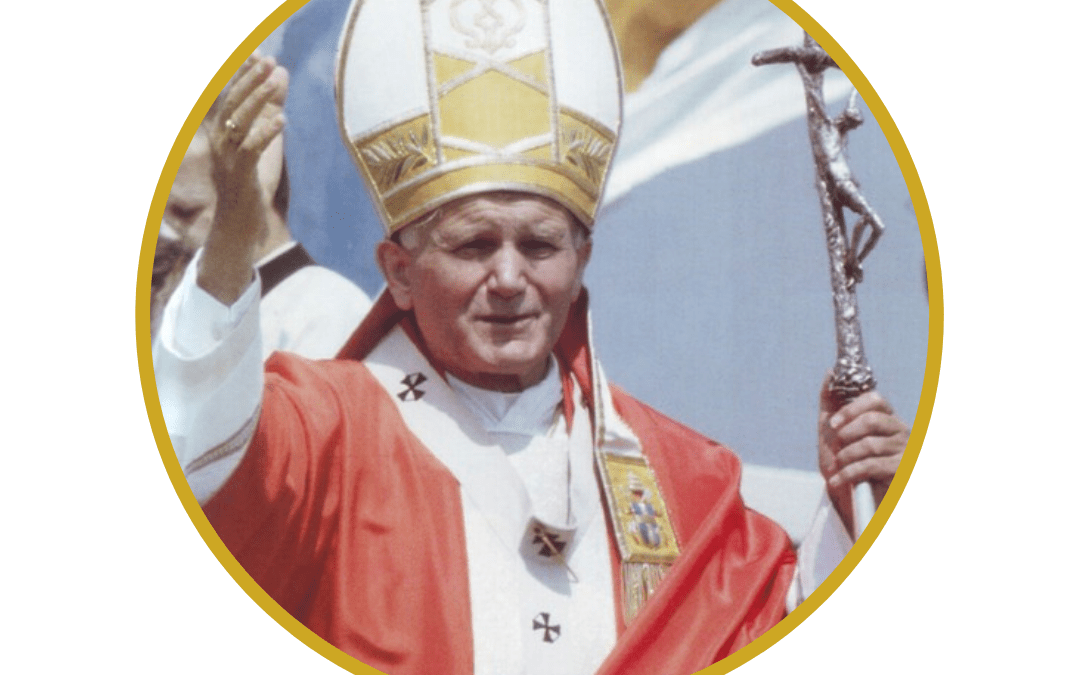 22 October: Feast of Pope Saint John Paul II. Also known as Saint John Paul the Great, he was born Karol Jozef Wojtyla in Wadowice, Poland on May 18, 1920. His early life was marked by loss. His sister, brother and mother all died before he was 12. Growing under loving guidance of his father, he was a vibrant youth, athletic and studious. He attended Jagiellonian University, performed in local theatrical productions and co-founded the Rhapsodic Theater of Kraków. He was introduced to the mysticism of St. John of the Cross and felt called to the priesthood. His plans were interrupted when Nazis invaded Poland in 1939. To avoid deportation, Karol worked in a stone quarry and a chemical plant. He then joined a clandestine seminary and was ordained priest in 1946. He pastored a parish in Niegowic, where he began to work with young people; taking them on many camping and hiking trips. After teaching at University, he was named auxiliary bishop of Kraków in 1958 – the youngest in Poland’s history. Bishop Wojtyla made significant contributions in the Second Vatican Council. He was soon elevated to the College of Cardinals. Cardinal Wojtyła was elected Pope on October 16, 1978, and took the name John Paul II. He would have one of the longest pontificates in history, nearly 27 years. His motto was “Totus Tuus – I am totally yours.” His papacy was an embodiment of that motto. John Paul II was a vigorous missionary: he took 104 trips to 129 different countries. He loved young people and established World Youth Day. He established the World Meeting of Families and the Pontifical Institute for Marriage and Family. He aided in the gradual removal of Communism from Eastern Europe and encouraged healing between Jews, Muslims and other religions. In 1981, he was the victim of an attempted assassination. Shocking the world, he showed only love and forgiveness when he visited his attacker in prison. JP II continued his missionary work, meeting with more than 17,600,000 pilgrims during General Audiences and countless millions more in visits around the world. John Paul II’s doctrinal legacy is vast. He was a prolific writer: authoring 14 encyclicals, 15 apostolic exhortations, 11 apostolic constitutions, 45 apostolic letters, and 5 books. With emphasis on the universal call to holiness, he beatified 1,338 and canonized 482, more than all popes in the last 500 years combined. Suffering from debilitating Parkinson’s disease, Pope JP II breathed his last on April 2, 2005, the vigil of Divine Mercy Sunday, which he had instituted. His final words were “Let me go to my Father’s house.” On April 28, 2005, Pope Benedict XVI announced that the normal waiting period before beginning the cause of beatification would be waived for JP II. He was beautified in 2011 by Pope Benedict XVI and canonized by Pope Francis in 2014.    “Do not be afraid! Open wide the doors for Christ!” — Pope St. John Paul II