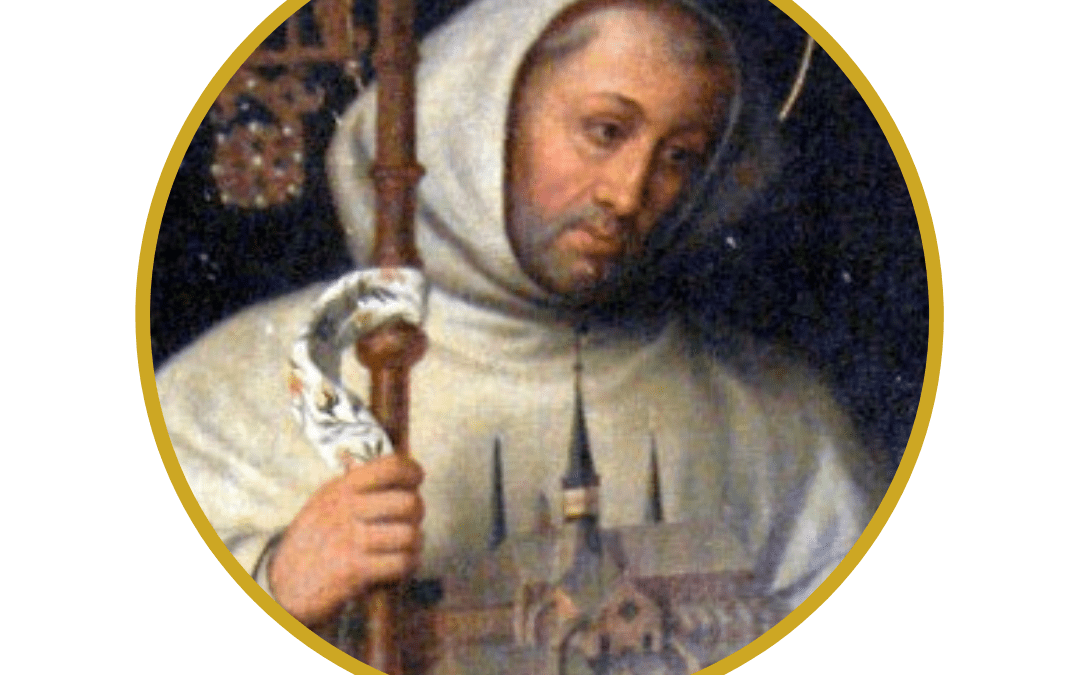 20 August: Feast of Saint Bernard of Clairvaux. Born in 1090, Bernard spent his early years near Dijon, France. His family was of Burgundian landowning aristocracy; he had five brothers and one sister. Bernard’s parents were exceptional models of virtue. It is said that his mother exerted a virtuous influence upon Bernard only second to what St. Monica had done for St. Augustine. Her death in 1107 so affected Bernard that he claimed that it was when his “long path to complete conversion” began. He turned away from his literary education toward a life of denial and solitude. He joined the Cistercians at age 22. Bernard was so passionate about his faith that he convinced his brothers, his uncle, and many of his friends to join him at the abbey. Bernard first entered the abbey at Citeaux, but only three years later was sent with 12 other monks to establish another monastery in the Diocese of Champagne. The monastery came to be known as Clairvaux (Valley of Light). He led the other monks there as the abbot for the rest of his life. Bernard’s physical ailments during this time may account for consistent partiality for physical rigors. He was plagued most of his life by impaired health (anemia, migraines, gastritis, hypertension, an atrophied sense of taste). However, as Bernard’s health worsened, his spirituality deepened. He also learned how to combine the contemplative life with important missionary work. Bernard was known for his strict observance of silence and contemplation; but these practices did not impede him from living a very intense apostolic life. Bernard taught the faith with humility. He was known for his focus on the truth that God, who is love, created mankind out of love and that man’s salvation consists of adhering firmly to Divine love, revealed through the crucified and risen Christ. Saint Bernard is also well-known for his Marian devotion, especially in using and promoting the “Memorare” prayer. Pope Pius VIII labeled Bernard as the “Honey-Sweet Doctor” for his eloquence in sharing the faith. Bernard continued to write and give sermons and he traveled throughout Europe defending the Christian faith. As the confidant of five popes and a major figure in church councils, Bernard considered it his role to assist in healing church wounds inflicted by the antipopes and to oppose rationalistic influences of the time. His greatest literary work is titled “Sermons on the Canticle of Canticles.” In it, St. Bernard wrote: “The Father is never fully known if He is not loved perfectly.” And, “Whence arises the love of God? From God. And what is the measure of this love? To love without measure.” St. Bernard was declared a doctor of the church in 1830, thanks to his many writings and sermons which greatly influenced Europe in the 12th century and his efforts which helped to avoid a schism in the Church in 1130. Bernard was extolled in 1953 as doctor mellifluus in an encyclical of Pope Pius XII; he was canonized in the year 1174. Saint Bernard is the patron of beekeepers; candlemakers; wax refiners; Gibraltar; Queens College, and Cambridge.

“What we love we shall grow to resemble.” – St. Bernard of Clairvaux