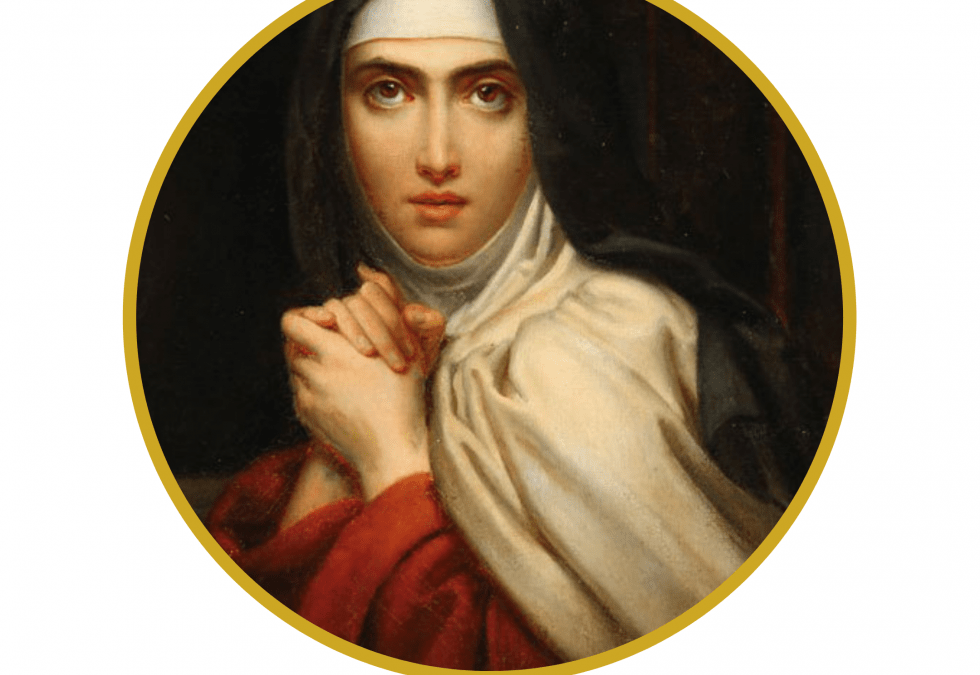 15 October: Feast of Saint Teresa of Jesus. Also known as St. Teresa of Avila, she was born in the Spanish city of Avila in 1515. Her father was an ardent Catholic, with a collection of spiritual books of the type his daughter would later compose herself. As a child, Teresa felt captivated by the vision of God granted to the saints in heaven. She and her brother once ran away from home for the sake of dying as martyrs in a Muslim country, though a relative found them and promptly sent them back home. When Teresa was 14, her mother died, causing profound grief and prompting Teresa to embrace the Virgin Mary as her spiritual mother. After this, she struggled with a loss of her childhood zeal for God. Her father sent her to be educated in a convent of Augustinian nuns. Illness forced her to leave the convent. But the influence of a devout uncle, along with reading St. Jerome’s writings, convinced Teresa to then join the Carmelite Order at age 20. She again became seriously ill. She had severe pain and physical paralysis for two years, and afterwards remained in a painful debilitated state. For the next 20 years, she was an obedient Carmelite but struggled with physical pain and spiritual dryness. When she was nearly 40, Teresa was dramatically called to contemplative prayer. She experienced profound changes in her soul and received visions from God. During prayer, Teresa heard God speak and often became totally enraptured and even levitated. These graces reached a climax when her heart received a “transverberation” (piercing) – a mystical grace where a saint’s heart is pierced with a “dart of love” by an angel. Teresa played a significant role in the renewal of the Church that followed the Council of Trent. She proposed a return of the Carmelites to their original rule of life, a simple and austere form of monasticism (founded on silence and solitude) believed to date back to the prophet Elijah. Together with Saint John of the Cross, she founded the Order of Discalced Carmelites – “discalced,” meaning barefoot. She went on to found 30 monasteries. In 1582, Teresa’s health failed her for the last time and she died on October 15th. She was canonized in 1622. In 1970, Pope St. Paul VI proclaimed St. Teresa the first woman Doctor of the Church. She is called doctrix mystica, doctor of mystical theology. {Nine months after Teresa died, her body was exhumed and found incorrupt. Later, her heart was removed, enclosed in a crystal vessel and placed in a silver reliquary. While this was being done they beheld a glorious sight: a visible wound from the angel’s dart! It can still be seen today at the Carmelite Monastery of Alba de Tormes in Spain. Miraculously, her heart has kept its color and three sharp thorns in the heart are still visible today.}

“Let nothing affright thee, Nothing dismay thee. All is passing, God ever remains. Patience obtains all. Whoever possesses God Cannot lack anything. God alone suffices.” –St. Teresa of Avila