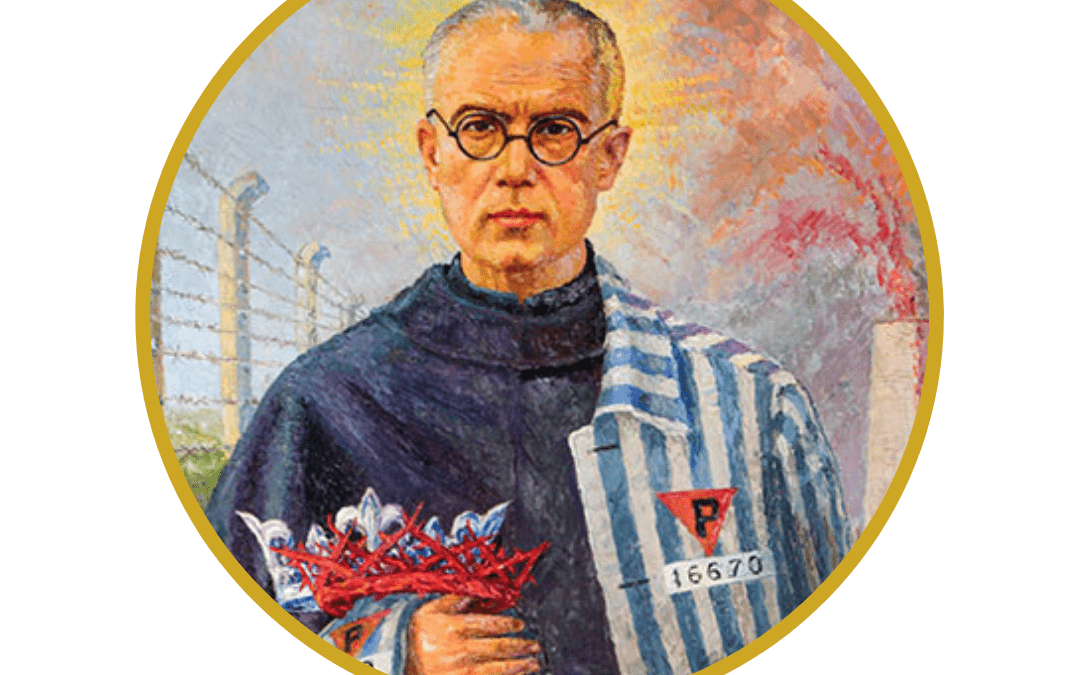 Saint Maximilian was born Raymond Kolbe in Poland in 1894. As a youth, he had a vision from the Blessed Mother. He described it best himself: “That night, I asked the Mother of God what was to become of me. Then she came to me holding two crowns, one white, the other red. She asked me if I was willing to accept either of these crowns. The white one meant that I should persevere in purity, and the red that I should become a martyr. I said that I would accept them both.” In 1910, he entered the novitiate of Conventual Franciscan Order and was given the name Maximilian. He was sent to study in Rome where he was ordained a priest in 1918. After returning to Poland in 1920, he wrote: “I must be a saint, the greatest saint possible. Remember that you are the absolute, unconditional, unlimited, irrevocable property of the Immaculate… My life, my death and my eternity are yours, O Immaculate. Do with me whatever you wish.” Back in Poland, Father Maximilian organized his Militia of the Immaculate Virgin Mary – a movement of Marian consecration. In 1922, he published the magazine, “Knight of the Immaculate” to promote devotion to Mary. In 1927, he built a town called the “Town of the Immaculate,” outside of Warsaw. There he trained ‘apostles of Mary’. By 1939, the City had expanded from 18 friars to 650, making it the world’s largest Catholic religious house. To better “win the world for the Immaculata,” the friars utilized modern printing techniques. They published countless catechetical and devotional tracts, a daily newspaper and a monthly magazine with a circulation of over one million. Maximilian started a shortwave radio station –he was a true “apostle of the mass media.” He was also a ground-breaking theologian. His insights into the Immaculate Conception developed understanding of Mary as “Mediatrix” of all graces and as “Advocate” for God’s people. In 1941, the Nazis imprisoned Father Maximilian in Auschwitz. In July, it was reported to the camp commander that a prisoner had escaped. In order to set an example, they selected ten men for the starvation bunker. When a man near him was chosen, a man who cried in protest because he had a family, Maximilian bravely stepped forward and said “Let me take the place of this man. I am a Catholic priest.” Maximilian was taken to endure an excruciatingly slow death. On August 14, 1941, the vigil of the Assumption of the Blessed Virgin Mary, Father Maximilian’s two-week ordeal in the starvation bunker was brought to an end by an injection of carbolic acid. Of the ten victims, he was the last to die. “Hail Mary!” was the last prayer on the lips of Father Maximilian, as he offered his arm to the person injecting the acid. In 1982, Saint JP II canonized Maximilian Kolbe as a “martyr of charity.” Saint Maximilian Kolbe is considered a patron of journalists, families, prisoners, the pro-life movement and the chemically addicted.

“Greater love has no man than this, that a man lay down his life for his friends” (John 15:12)