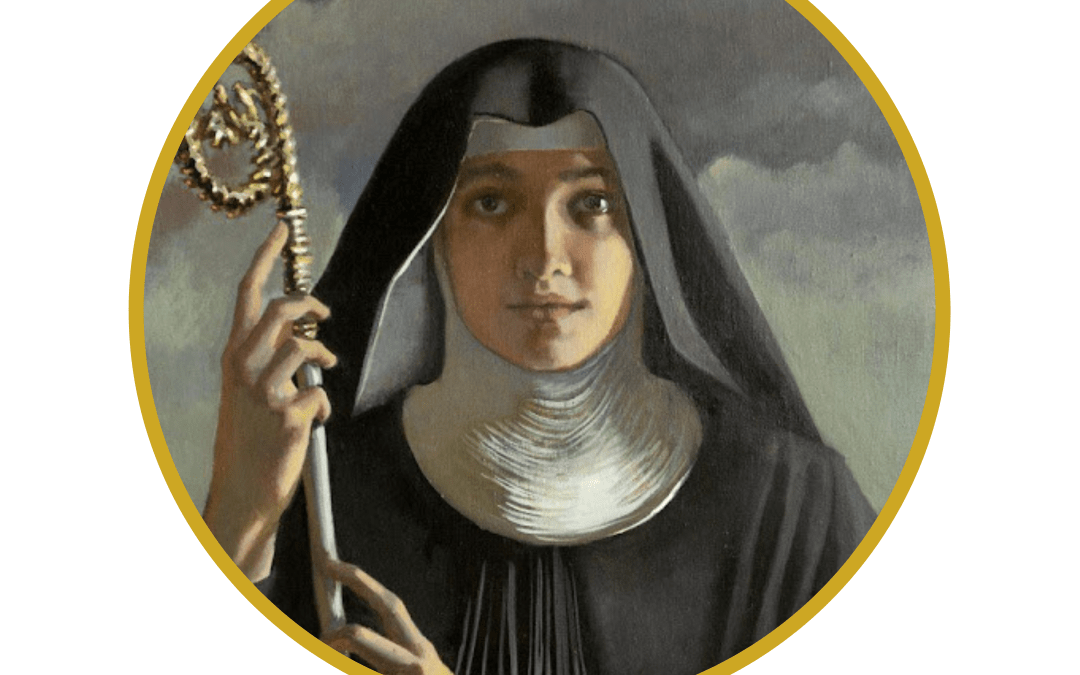 10 February: Feast of Saint Scholastica. Scholastica was the twin sister of Saint Benedict, the Patriarch of Western monasticism. She was born in Umbria, Italy, about 480. Under Benedict’s direction, Scholastica founded a community of nuns near the great Benedictine monastery Monte Cassino. Inspired by Benedict, from early youth Scholastica dedicated her life to seeking and serving God. In his Second Book of Dialogues, Pope St. Gregory described the last meeting between these holy twins: “His sister Scholastica, who had been consecrated to God in early childhood, used to visit with him once a year. On these occasions he would go to meet her in a house belonging to the monastery a short distance from the entrance. For this particular visit he joined her there and they spent the whole day singing God’s praises and conversing about the spiritual life. When darkness was setting in they took their meal together and continued their conversation until it was quite late. Then the holy nun said to him, ‘Please do not leave me tonight, brother. Let us keep on talking about the joys of heaven till morning.’ ‘What are you saying, sister?’ he replied. ‘You know that I cannot stay away from the monastery.’ The sky was so clear at the time, there was not a cloud in sight. “At her brother’s refusal Scholastica folded her hands on the table and rested her head upon them in earnest prayer. When she looked up again, there was a sudden burst of lightning and thunder accompanied by such a downpour that Benedict and his companions were unable to set foot outside the door. By shedding a flood of tears while she prayed, this holy nun had darkened the cloudless sky with a heavy rain. The storm began as soon as her prayer was over; thunder was already resounding as she raised her head. Realizing that he could not return to the abbey in this terrible storm, Benedict complained bitterly. ‘God forgive you, sister!’ he said. ‘What have you done?’ Scholastica simply answered, ‘When I appealed to you, you would not listen to me. So I turned to my God and He heard my prayer. Leave now if you can. Leave me here and go back to your monastery.’ This, of course, he could not do. He had no choice now but to stay. They spent the entire night together and both of them derived great profit from the holy thoughts exchanged about the interior life. The next morning Scholastica returned to her convent and Benedict to his monastery. Three days later as he stood in his room looking up toward the sky, he beheld his sister’s soul leaving her body and entering the heavenly court in the form of a dove. Overjoyed at her eternal glory, he gave thanks to God in hymns of praise. Then, after informing his brethren of her death, he sent them to bring her body to the abbey and bury it in the tomb he had prepared for himself. The bodies of these two now to share a common resting place, just as in life their souls had always been one in God.” Saint Scholastica died in the year 547. She is the patron saint of convulsive children, nuns, and for protection from rain and storms.

Ideas for celebrating this feast day:

“She was able to do more because she loved more.”—Saint Gregory the Great. May we all be inspired by St. Scholastica to hold love as the first rule of our lives.