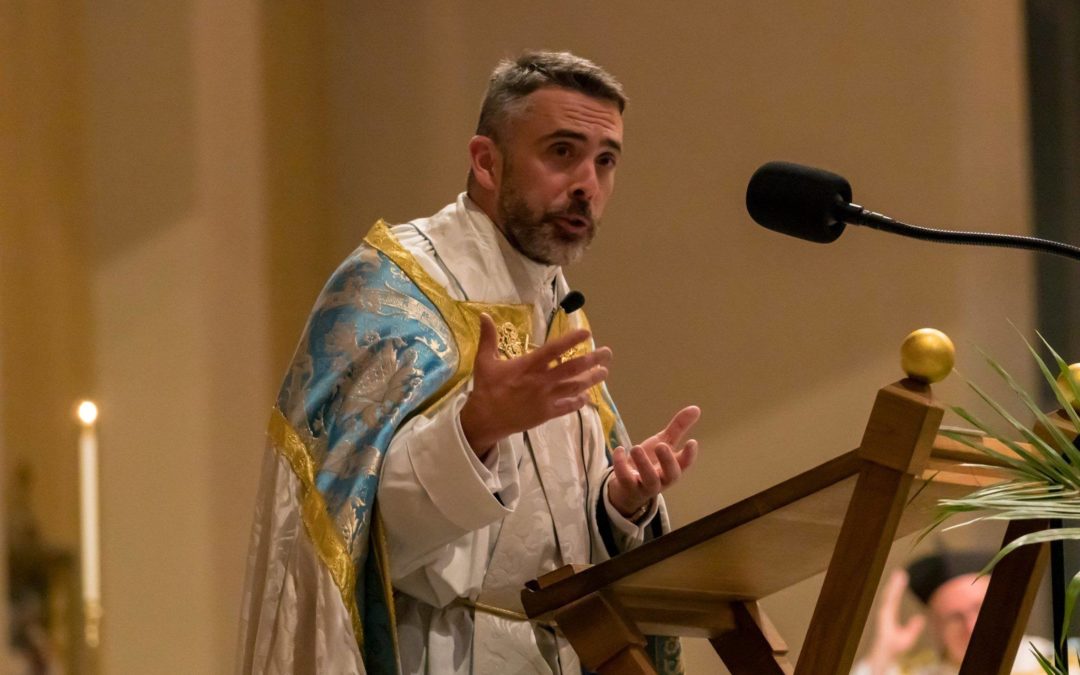 In 1623, a bishop was dragged out of his house by his own parishioners, an axe splitting upon his head before his naked body was dragged through the streets and weighed down with stones before being thrown into a river.  His crime?  Josaphat Kuntsevych preached that the Pope is the Vicar of Christ and that Christians must be in communion with the Bishop of Rome and each other if they were to be true to the faith handed down to them from the apostles.  This was a dogma of the faith revealed by God to His Church.  King Sigismund III Vasa sought to unite the many people of his realm to the true Church, and the bishop and the king taught a message of unity.  In 1595, the Union of Brest made that union a reality recognized by both Church and State.  But the people of the archdiocese of Polotsk wanted their Church and State to be independent of Rome, Russia and their own King.  An eternal truth of the faith all of a sudden became a contemporary political issue.  Josaphat’s priests rejected their archbishop, the king and the union, and took over the churches, refusing to acknowledge the legitimacy of either their bishop or their ruler.  The archbishop held this ground and expelled the rebellious priests from taking over Catholic churches for a schismatic religion.  There is no record of what he actually thought about the political desires of his people.  Did he recognize that there was a real desire for freedom, for nationhood, for their own culture and language?  We will never know.  And that’s the way that it should be.

If a prophet presumes to speak in My Name an oracle that I have not commanded him to speak, or speaks in the name of other gods, he shall die.  In Deuteronomy 18, the Lord gives Moses clear instructions on how he is to use his leadership of God’s people: it is in the service of revealed truth and that alone, not for any other reason whatsoever.  As the great liberator of the people of Israel, Moses could have been seen as a political leader in some way.  But God reminded Moses that he was called to exercise a prophetic ministry among his people, and that excluded him from instrumentalizing that ministry for any other ends whatsoever, whether they were true or not.  Moses was exasperated by the constant complaining and infighting of the Hebrews.  He preached a message of trust in the providence of God as they wandered through the desert, but their hunger and thirst caused them to turn on the very man God chose to lead them forth from slavery.  The Lord commanded him to strike a rock with his staff so water would flow from it for them to drink, but Moses was so angry that his people were so angry, he struck it twice.  God said to Moses and Aaron, Because you did not trust in Me enough to honor Me as holy in the sight of the Israelites, you will not bring this community into the land I give them.  God had given Moses the gift of prophecy and the moral leadership of His people, but He chose to exercise that charism outside of what God had designed for it, and so Moses was to die before He ever saw the promised land.  St Josaphat knew all too well the cautionary tale of Moses.  His was not a political message; it was a message of divinely revealed truth, but because others wanted to politicize, it, he paid for his faithfulness by receiving a martyr’s crown.  He got to see the Promised Land of heaven, but did Moses?

Closer to our own time, Josemaria Escrivà, whose relics are housed in the church, was a priest in Spain working with young people when a civil war ripped his beloved country apart.  The Communist persecution of the Church was so bad that his spiritual sons smuggled him out from the Communist controlled part of the country to where the opposition, called the Nationalists, were in power.  When the Nationalists won the war, military general Francisco Franco became the Generalissimo of Spain.   Franco ended the persecution of the Church.  He was a pious man who had a relic of the arm of St Teresa of Avila on his desk, and made sure that civil society conformed to the moral teaching of the Church.  He also was responsible for the brutal murder of his political opponents, estimations of which number from 15,000 to 50,000.  Franco saved the Church, but he also used it for his own purposes, and the result of that uneasy alliance is that even today many Spaniards hate the Church for being perceived as an enemy to the freedom of the people.

As a priest in that toxic environment, Josemaria Escriva scrupulously avoided talking about politics or  politicians at all.  Not because he didn’t believe that the Church shouldn’t play a role in the public square.  He wrote, Have you ever stopped to think how absurd it is to leave one’s Catholicism aside on entering a university, a professional association, a scholarly society, or Congress, as if you were checking your hat at the door?  He knew that the baptized faithful are the Church, and as such must bring their faith to bear even in the political arena.  But as a priest, he was very careful to respect the use his spiritual children would make of their freedom to participate in that part of life.  He resisted the relentless politicization of everything in life by distinguishing the eternal truths of faith and the freedom of Christians when it comes to contingent realities of public life.  He was suspected at one time of being a dangerous liberal, and at another time of being a reactionary conservative.  But he never changed because His Lord, who is Truth, does not change.  As he wrote:

If anyone saw Christ’s kingdom in terms of a political program he would not have understood the supernatural purpose of the faith, and he would risk burdening consciences with weights which have nothing to do with Jesus.[1] All those who exercise the priestly ministry in the Church should always be careful to respect the autonomy which the Catholic faithful need in order . . . to effectively carry out their specific apostolic task in the middle of the world. To attempt the opposite, to try to instrumentalize lay people for ends that exceed the proper limits of our hierarchical ministry, would be to fall into . . .  clericalism.[2]  The Church is not a political party, nor a social ideology, nor a world-wide organization for harmony or material progress, even though we recognise the nobility of these and other activities. The Church has always undertaken and undertakes today an immense work on behalf of the needy, of those who suffer, of all those who bear in any way the consequences of the only true evil, which is sin. And to all — to those who are in any way deprived and to those who claim to enjoy the fullness of earthly goods — the Church comes to confirm only one, essential, definitive truth: that our destiny is eternal and supernatural, that only in Jesus Christ are we saved for all time, and that only in him will we achieve in some way already in this life true peace and happiness.  Ask God our Lord now, along with me, that we Catholics may never forget these truths, and that we may resolve to put them into practice.[3]

It is vitally important that we remember that the Catholic Church is not the Republican Party at prayer, or the Democratic Party at prayer.  The teaching of the Church is never going to line up completely with any political platform on this earth.  It is the job of the laity to form their consciences according to revealed truth and then use their freedom to participate in the political process as they see fit.  It is the job of the priest to talk to men about God and to talk to God about men.  The Lord Himself warned us, Put not your trust in princes.  As soon as you put your trust in any creature, in any person, in any institution, you will be disappointed, because your true home is not here.  It is in heaven.  That doesn’t mean that we do not work out our salvation here below in fear and trembling, but it does mean that we do not allow the things of this world, as important as they are, to divide us against each other.  The most radical political statement the Lord Jesus gave in the Gospel is ultimately the one which must govern every action a Christian does: Love one another as I have loved you.

St Paul wrote to the Galatians in chapter 3 verse 28: There is neither Jew nor Greek, slave nor free, male nor female, for you are one in Christ Jesus.  Distinctions in civil life and political discussions have their place, even among Christians, who can often come to different solutions to similar problems.  But they have no place here.  In the Byzantine Liturgy, the Praying Church sings: Let us, who mystically represent the cherubim and sing the thrice holy hymn to the life giving Trinity, lay all aside all earthly cares, that we may receive the King of all.  When the Church gathers to celebrate the Wedding Feast of the Lamb, as soon as we pass through the doors that separate heaven and earth, it is time to leave politics behind.  The country that issues our passport, whether we are legal or undocumented, whether our first language is English, Spanish or Sign Language or Latin, whatever we think about the issues of the day, and they are many: none of that matters.  All of that will be waiting for you when you step out that door after Mass.  The house of God is an oasis of peace, where we go to escape the madness of this world which is destined to pass away, so that we may feast on food for the journey.  Filled with the delights of that anticipation of heaven, we go out to the world as it is and transform it by the Love we have received, and become agents of unity, reconciliation, justice and peace.