What is Sacred Music? Why should we care? Find out this and more in this informative FAQ provided by the Church Music Association of America.

A Chronicle of Reform: Catholic Music in the 20th Century

This study by Rev Msgr Richard J Schuler on the history of church music in the United States during the 20th century is an attempt to recount the events that led up to the present state of the art in our times.  It covers the span from the motu proprio Tra le solicitundini, of Saint Pius X, through the encyclical Musicae sacra disciplina of Pope Pius XII and the Constitution of Sacred Liturgy of the Second Vatican Council and the documents that followed upon it. In knowing the course of development, musicians today may build on the accomplishments of the past and so fulfill the directives of the Church.

A Chronicle of the Reform

Click the link below to listen and practice the  Mass setting for our Ordinary Form Masses.

We also will start doing the English Creed according to the setting St Felix by Jeff Ostrowski:

Latin for Sundays of the Year - Orbis Factor

Latin for Eastertide - Mass I

How to Sing Vespers

Download the .pdf file below for Vespers and then listen to the mp3 file of Fr Smith singing Vespers to learn how to sing them! 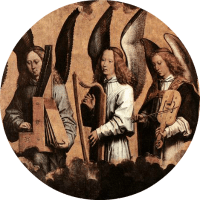