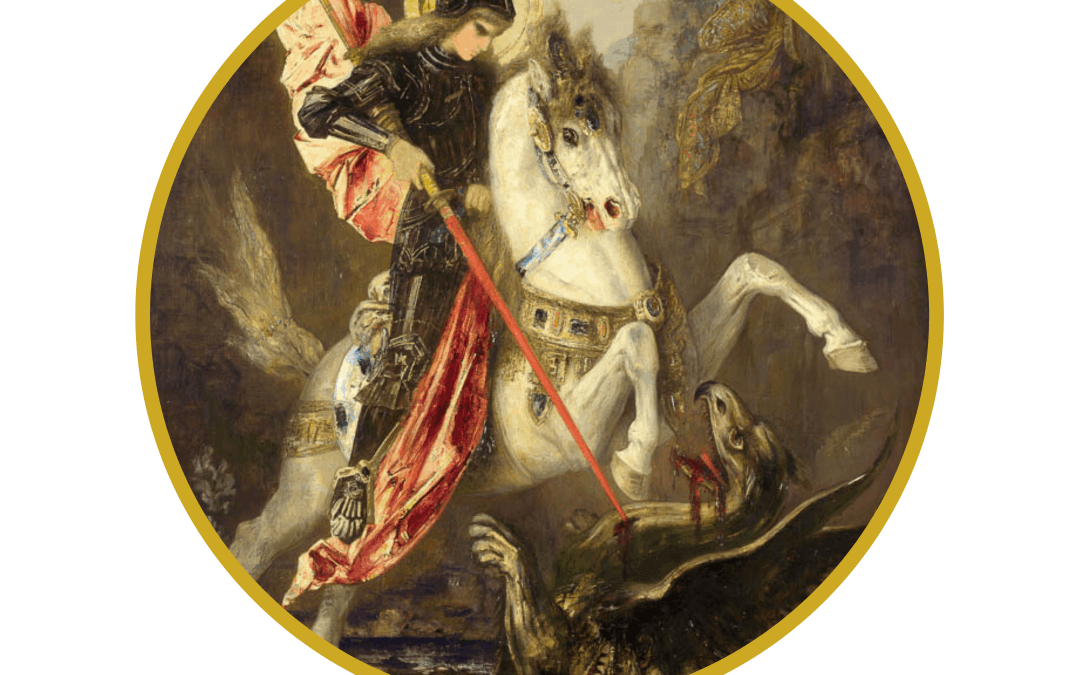 23 April: Feast of Saint George. George was born the son of a Roman officer and a Greek native of Lydda. Both were Christians from noble families and George was raised to follow their faith. When George was old enough, he joined Diocletian’s army. By his late 20’s, George became a Tribunus and served as an imperial guard for the Emperor at Nicomedia. In 303 A.D., Diocletian, who hated Christians, announced that every Christian would be arrested and every soldier should offer a sacrifice to the Roman gods. George refused to abide by the order and told Diocletian, who was angry but valued his friendship with George’s father. When George publicly announced his beliefs before his peers, Diocletian was forced to take action. In an effort to save George, Diocletian tried to convert him to believe in the Roman gods. He even bribed him with land, money, and slaves in exchange for offering a sacrifice to the gods. Diocletian kept this up, making several other offers but George refused them all. Finally, after exhausting all other options, Diocletian ordered George’s execution. In preparation for his death, George gave his money to the poor. Then, he was forced to endure several torture sessions. In one of these sessions, he was lacerated on a wheel of swords and required resuscitation three times. Despite all of the intense suffering, George did not waver in his Faith or turn away from God. On April 23, 303 A.D., George was beheaded. Saint George is honored as a brave martyr for his Faith. Interestingly, Saint George is known and revered by both Muslims and Christians. Saint George is the patron saint of England and Catalonia and his cross can be found throughout England. He is also the patron saint of soldiers and Boy Scouts. In older works, Saint George is depicted wearing armor and holding a lance or fighting a dragon, representing Christ’s enemies.

Now, what about the famous story of Saint George and the Dragon? Legends and stories abound that tell of George fighting dragons. They are believed to be more fable than fact. The Western version of these tales tells of a “dragon” (or crocodile?!) that made its nest at a spring that provided water for a village. The people of that town were unable to collect water due to the danger. They attempted unsuccessfully to remove the dragon from its nest. The beast would temporarily leave when they offered it a sheep or other such temptation. This worked until all the town’s sheep were eaten. The desperate people then decided that offering the beast a maiden was necessary. The townspeople chose the victim by drawing straws. One day, the princess’ straw was drawn. The monarch begged for her to be spared but the people would not have it. She was offered to the dragon, but before she could be devoured, Saint George appeared. He faced the dangerous beast, protected himself with the Sign of the Cross, and slayed the dragon. George then gave a rousing sermon and the townspeople abandoned their paganism and were converted to Christianity. Given a large reward by the king, George distributed it to the poor, then rode away. It is said that Saint George killed the dragon near the sea in Beirut. Thus, Saint George Bay was named in his honor.