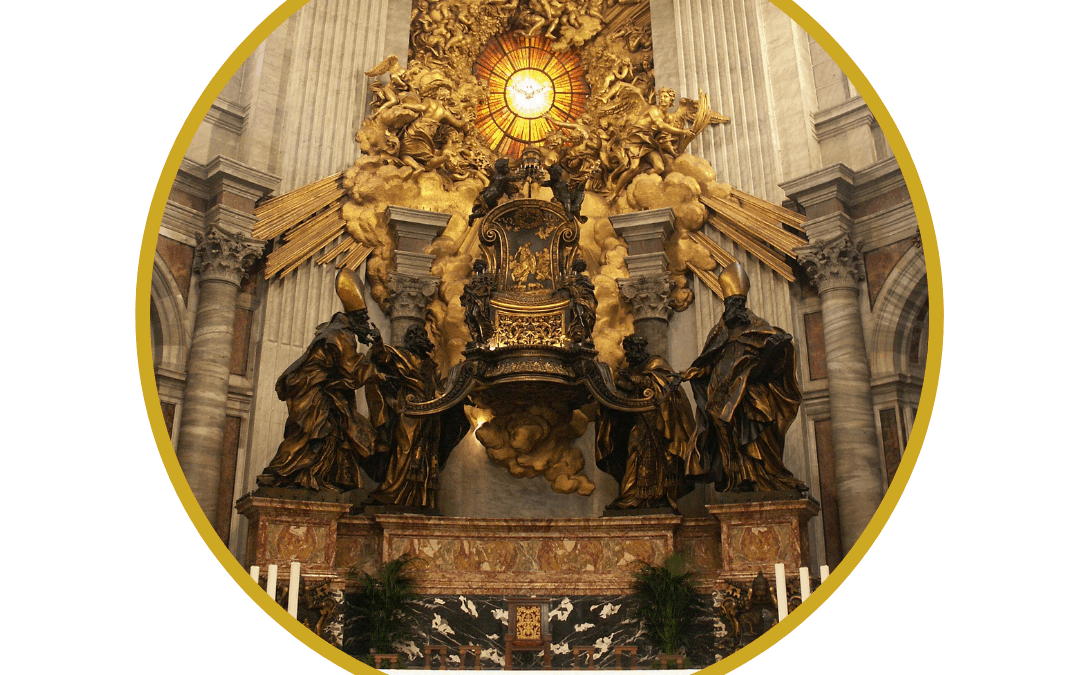 22 February: Feast of the Chair of Saint Peter. Why do Catholics celebrate the feast of a chair?? Today, we are not celebrating a piece of furniture. The Chair of Peter is a physical symbol that communicates a spiritual reality. This Feast has been celebrated since the early Church and has multifold meaning. First, it refers to the actual chair (called the cathedra petri in Latin) that Saint Peter sat on as the first pope. Officials in the Roman Empire would sit on chairs when engaged in official work. This tradition was replicated in the Church. Catholic Bishops, for example, have a special cathedra they sit in for liturgy in their cathedral church.

The physical “chair of Peter” is encased in a sculpture designed by Bernini located in Saint Peter’s Basilica in Rome. In the apse of the Basilica, a great bronze throne encloses the wooden chair from the ninth century, long thought to be Peter’s own chair. On the chair itself, Bernini depicts three key scenes from Peter’s life: the giving of the keys (symbolizing the authority to lead the Church), the washing of feet (symbolizing how Peter’s office is one of service), and Jesus’ instruction to Peter to “Feed my sheep” (pointing to his role as teacher and guide). Below the chair are statues of four doctors of the Church (Saints Athanasius, John Chrysostom, Ambrose, Augustine). Above the throne is an oval window with the image of the Holy Spirit as a dove. The symbolism of this great work of art is clear: the Holy Spirit guides the Church through Saint Peter and his successors, who authoritatively teach the Word of God transmitted in Sacred Scripture and Tradition.

Next, this feast day is about the spiritual authority bestowed upon Saint Peter by Jesus. Jesus said to Peter, “You are Peter, and on this rock I will build my church, and the gates of hell shall not prevail against it” (Matthew 16:18). Pope Benedict XVI summarized the spiritual dimension of the Chair of Peter: “So what was the ‘Chair’ of St Peter? Chosen by Christ as the ‘rock’ on which to build the Church, he began his ministry in Jerusalem… The Church’s first ‘seat’ was the Upper Room, and it is likely that a special place was reserved for Simon Peter in that room where Mary, Mother of Jesus, also prayed with the disciples… Then Peter went to Rome, the center of the Empire… So it is that the See of Rome, which had received the greatest of honors, also has the honor that Christ entrusted to Peter of being at the service of all the particular Churches for the edification and unity of the entire People of God… The See of Rome, after St Peter’s travels, thus came to be recognized as the See of the Successor of Peter, and its Bishop’s ‘cathedra’ represented the mission entrusted to him by Christ to tend his entire flock… Celebrating the ‘Chair’ of Peter, therefore, means attributing a strong spiritual significance to it and recognizing it as a privileged sign of the love of God, the eternal Good Shepherd, who wanted to gather his whole Church and lead her on the path of salvation.”

In the fourth century, St. Jerome wrote to Pope Damascus I: “I follow no leader but Christ and join in communion with none but Your Blessedness, that is, with the chair of Peter. I know that this is the rock on which the Church has been built.”