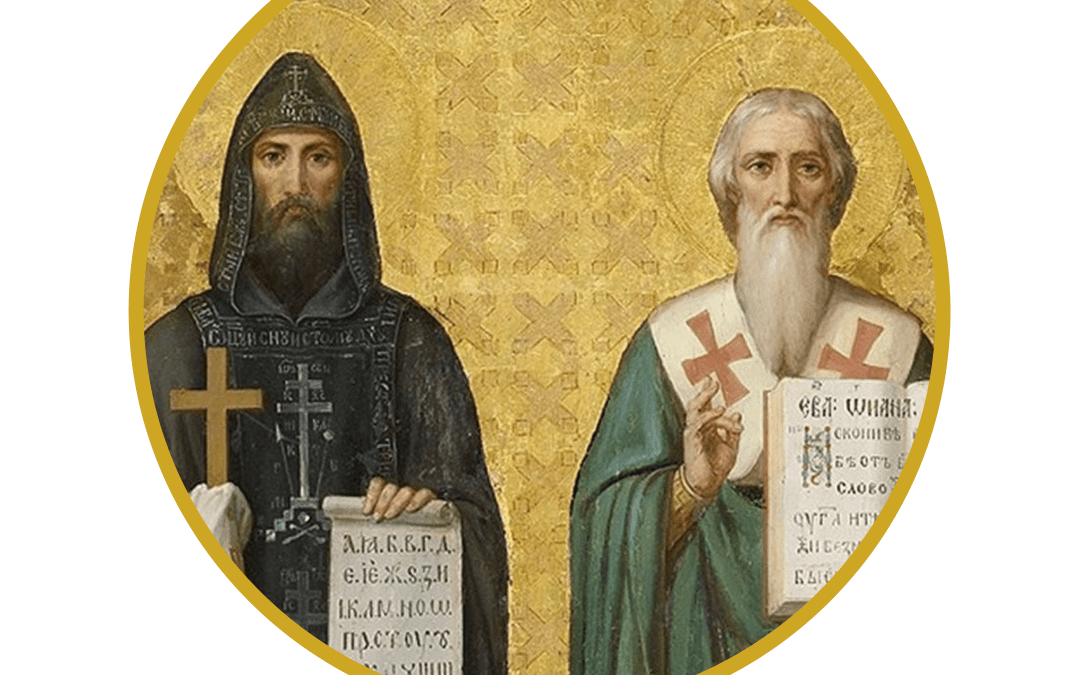 14 February: Feast of Saints Cyril and Methodius. Today, the Church honors two brothers known as the “Apostles of the Slavs” for their tireless work in spreading the Gospel throughout Eastern Europe. Born into a prestigious senatorial family in Thessalonica, in 815 and 826, Cyril and Methodius received an excellent education but renounced their wealth and status. They chose instead to become priests. Both were in a monastery when authorities from the Khazar Empire sent for a Christian missionary. Cyril was chosen and Methodius accompanied. They converted many. By the middle of the ninth century, Prince Rastislav of Moravia wrote to the Byzantine Emperor Michael III, asking for teachers who could teach his people the Christian faith in their own language. Cyril and Methodius were chosen. When they set out on this missionary journey, letters of a new Slavonic alphabet were revealed to them in answer to prayer. Together, they invented the “Cyrillic alphabet” as a way to communicate the faith. They translated the Scriptures and the Liturgy into this Slavonic. They said of their alphabet, ‘Receive this gift, which is more precious and greater than all silver and gold and precious stones and all magnificent wealth’. The two labored in Moravia for years, achieving great success in spreading the Faith. Their Byzantine origins and use of the vernacular language caused German church officials to regard them with suspicion. However, after being summoned to Rome, they met with Pope Adrian II who warmly approved of their methods. Cyril and Methodius were commended by the pope for their missionary activity and ordained bishops. Yet Cyril would not return to Moravia; he died in Rome on February 14, 869. He is buried in the Basilica of San Clemente. Methodius returned to Moravia and labored as a missionary among the Hungarians, Bulgarians, Dalmatians, and in Carinthia. Falling again under suspicion, he returned to Rome and defended the use of the Slavonic language in the liturgy. The Pope bestowed upon him the dignity of archbishop. After his return to Moravia, Methodius spread the light of faith in Bohemia and Poland, and went to Moscow to establish the diocese of Kiev. He suffered imprisonment for three years under German critics; Pope John VIII managed to have Methodius freed and reinstated as archbishop. Pope John VIII continued to support Methodius’ use of the Slavic language, despite continuing controversy with the German church. Eventually, with the help of Greek priests, Methodius translated the whole Bible into the language that is known today as Church Slavonic. After a life spent spreading the Faith, Methodius died on April 6, 885. Both brothers are venerated in the Orthodox Church as saints with the title of “equal-to-apostles”. In 1880, Pope Leo XIII introduced their feast into the calendar of the Roman Catholic Church. In 1980, Pope St. John Paul II declared them co-patron saints of Europe, together with Saint Benedict of Nursia.

Saint Valentine: who was he?
Although hard to verify, legend states that Valentine, along with St. Marius, aided Christian martyrs during the Claudian persecution. Claudius issued a decree forbidding marriage, to increase army troops (believing single men better soldiers than married men). Valentine defied this decree and urged young lovers to come to him in secret to be married. Eventually he was discovered, arrested, and condemned to death. While in prison, Valentine befriended the jailer and his blind daughter. The daughter often him brought food and messages. Valentine was able to convert both father and daughter to Christianity. Legend says he also miraculously restored the daughter’s sight. The night before his execution, he wrote a farewell message to the girl and signed it affectionately “From Your Valentine,” a phrase that lives on today. He was executed on February 14, 273. The Martyrology says, “At Rome, on the Flaminian Way, the heavenly birthday of the blessed martyr Valentine, a priest. After performing many miraculous cures and giving much wise counsel he was beaten and beheaded under Claudius Caesar.” A valentine has become a universal symbol of friendship and affection shared on the anniversary of his death: St. Valentine’s Day.