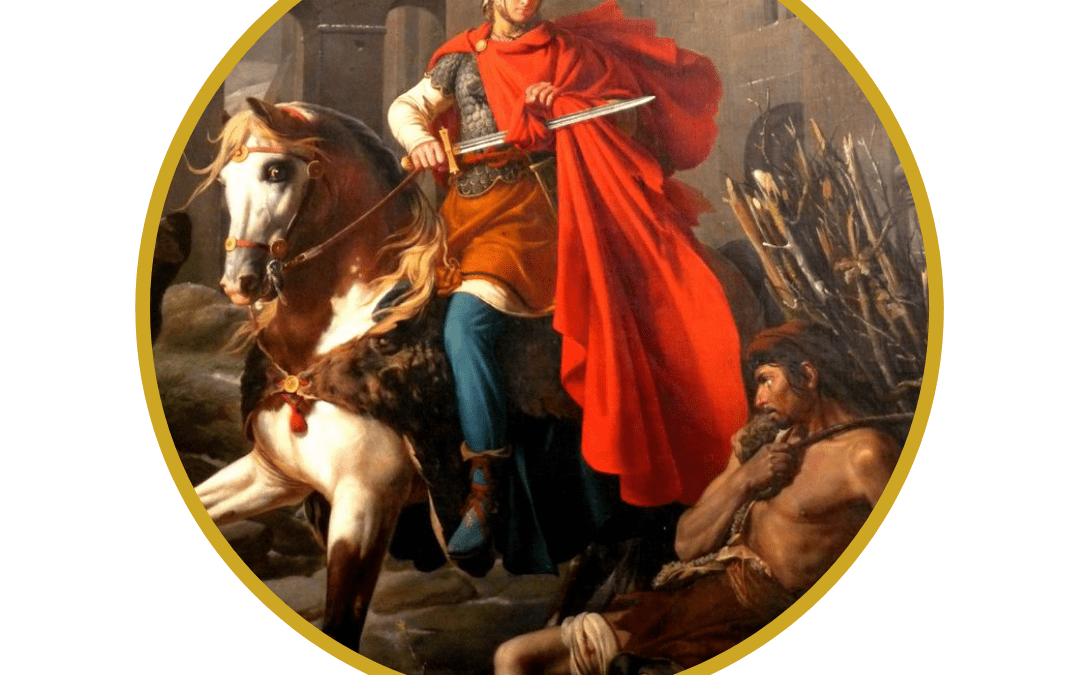 Born to pagan parents, this son of a veteran was forced at the age of 15 to serve in the army. Martin was baptized a Christian at age 18. He lived more like a monk than a soldier. One of the most famous stories associated with Martin happened while he was in the army: Martin came across a poor, naked beggar at the gates of Amiens who asked alms in Christ’s Name. Martin had nothing with him except his weapons and soldier’s mantle; but he took his sword, cut his own cloak in two, and gave half to the poor man. That night, Christ appeared to him clothed with half a mantle and said, “Martin, the catechumen, has clothed ME with his mantle!” At age 23, Martin refused a war bonus and requested dismissal from the army. He told his commander: “I have served you as a soldier; now let me serve Christ. Give the bounty to those who are going to fight. But I am a soldier of Christ and it is not lawful for me to fight.” He was accused of cowardice and after great difficulty, was discharged. Martin then dedicated himself to God’s work. He traveled to Tours where he began studying under Hilary of Poitiers (a doctor of the Church). Martin was ordained as an exorcist. Martin also became a monk. He established a French monastery near Poitiers. He lived there for 10 years, forming his disciples and preaching throughout the countryside. The people of Tours demanded he become their bishop. Martin did not wish it (was so reluctant that he hid in a barn full of geese which honked loudly and gave him away to the archbishop!). He thus became bishop of Tours and served faithfully. Along with Saint Ambrose, Martin rejected putting heretics to death. He worked against the Arian heresy, paganism, and the Druid religion. He was an extraordinary evangelist and won many to the Christian faith. Once the devil appeared to him and spoke as if he were Christ. Martin recognized the deceit. Three dead persons he raised to life. When he was an old man, Martin fell into a painful fever. Although he longed for Heaven, Martin prayed: “Lord, if your people still need me, I do not refuse the work. Your will be done.” Sick and suffering, he was called to heaven on November 11, 397. Saint Martin of Tours is a patron of the poor, soldiers, horsemen, alcoholics, tailors, and winemakers.